Update Required To play the media you will need to either update your browser to a recent version or update your Flash plugin.
By Faith Pirlo
15 September 2022

In today's Everyday Grammar, we will discuss one of my favorite characters, Mrs. Frisby. She is from the children's book, Mrs. Frisby and the Rats of NIMH by Robert C. O'Brien. 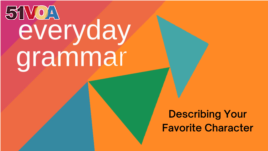 Mrs. Frisby is a field mouse and a mother. Her mate, father to their children, has died. Mrs. Frisby needs help moving her family to their summer home.

This week, we will consider a few areas when looking at Mrs. Frisby: the character's appearance or looks and her thoughts and speech. In a future Everyday Grammar, we will look at her actions and how other characters think about her.

Often story writers use descriptive language such as adjectives to provide a mental picture of the character's appearance.

With her forepaws and sharp teeth she pulled off a part of the husk from the top ear of corn...

Here O'Brien describes Mrs. Frisby's physical appearance while she is actively seeking food for her children.

"Forepaws" is a compound noun. "Fore" means front in this case. Paws are the animal's feet.

Mrs. Frisby's front teeth are described with the adjective "sharp."

When I think of Mrs. Frisby's physical appearance, I picture a small, light brown mouse with a white stomach.

The character's thoughts and speech

Another way to describe a character is through the thoughts and feelings of the character and what they say.

In one event, Mrs. Frisby tries to save Jeremy, a crow or black bird who tied himself up in a fence. The two of them are in discussion.

(Mrs. Frisby) "Why did you pick up the string?"

The crow, who was very young indeed – in fact only a year old – said... "Because it was shiny."

Mrs. Frisby is trying to understand how Jeremy got himself tied up in the fence.

To do this Mrs. Frisby uses a wh-question of "why." She wants to know the reason why Jeremy is in this situation. This shows that Mrs. Frisby is very curious and is always questioning.

Mrs. Frisby also uses the imperative or command form in the sentences:

The structure for the imperative or command form is:

Base form of main verb (no subject)

We understand the subject of commands to be "you", but we do not need to write the subject when making the command.

"You come down here."

Mrs. Frisby's mothering skills come out as she tries to help Jeremy, so she uses commands to tell Jeremy what to do.

Thoughts of a character are just as important as what they say. If we know what a character thinks, this can help us understand what motivates the character.

For example, before Mrs. Frisby offers to help Jeremy, we are given some understanding of what she thinks about him.

Birdbrain, thought Mrs. Frisby, and then recalled what her husband used to say: The size of the brain is no measure of its capacity.

Instead of using quotation marks ("...") that show speech, the author only uses verbs and commas to show what Mrs. Frisby is thinking.

The two verbs are "thought" and "recalled." These verbs are used in the past tense to show Mrs. Frisby already had these thoughts and to help with telling the story.

Mrs. Frisby thinks that Jeremy is not very smart for getting tied up in the fence. Then she remembers a saying her husband had about brain power.

In this week's report we looked at how to describe a character from a book. We considered how the author uses adjectives to describe Mrs. Frisby's appearance. We can think about the character's talks with other characters, like how Mrs. Frisby was questioning Jeremy or how she used commands. We even looked at her thoughts and memories.

Here is how I would describe Mrs. Frisby so far with what we know about her:

Let's end this report by continuing our homework assignment. Use your favorite character from a book. Try to find where the character is described. What adjectives are used to describe their appearance?

Next, look at where they are speaking. Find those quotation marks. What are they saying? Find parts in the story where the character's thoughts are shown. What are they thinking or remembering?

Write these sections down and send them to us at learningenglish@voanews.com.

We may use your writing in a future report of Everyday Grammar.

Describe your favorite character in the comments below or write to us at learningenglish@voanews.com.

character – n. a person (or animal) who appears in a story, book, play, movie, or television show

literature – n. written works considered as having high quality and ideas of lasting and widespread interest

husk – n. the outside of something that has had its insides removed

paw – n. the foot of an animal

fence – n. a barrier (as of wood or wire) to prevent escape or entry or to mark a boundary

string - n. a long, thin piece of material that one uses to hang things or connect things together

motivate–v. to give someone energy or encouragement to do something

birdbrain – n. a way to insult another person's intelligence by comparing it to the size of a bird's brain

capacity – n. the largest amount that something can hold

quotation – n. a group of words taken from a written work or speech and repeated by someone other than the writer or speaker

irregular – adj. not following the usual rules about what should be done

regular – adj. following the normal patterns by which word forms