Update Required To play the media you will need to either update your browser to a recent version or update your Flash plugin.
By John Russell
21 January 2023


Designers are increasingly using different kinds of materials to produce products that do not harm the environment.

Reused plastic bottles, wood, plant fiber, and even seaweed are being used in place of traditional materials for household goods and clothing. 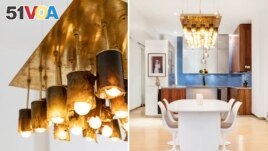 This combination of photos released by NEA Studio shows a chandelier made from dried algae from designer Nina Edwards Ankers. (NEA Studio via AP)

But a closer look shows that they are made of algae.

Anker came up with the idea while working on a doctoral research project at the Oslo School of Architecture and Design.

Anker chose not to hide the dried algae. "From the beginning, we wanted to keep the integrity of the material, and display its unique properties," Anker said.

She is one of many designers thinking about traditional materials. She wants to find ways to mix design ideas with production and supply methods that do not use up resources.

A show for new materials in Germany

Heimtextil is an international trade show, or fair, for new textiles in Frankfurt, Germany. This year's fair placed attention on making new products that came from reused materials.

"We'll see companies demonstrating how inorganic materials like nylon, plastic and metal can be reused – for example, carpet tiles that can be dismantled at the end of their life and used as a raw material for new tiles," he said.

He added, "And there's seaweed, used to produce acoustic mats and panels that provide great insulation, are fire-resistant and regulate humidity well...At the end of their life, the panels can be shredded and reused."

Fashion industry expert Veronika Lipar described the field's most important change – a move to sustainability. She said, "The industry is trying to minimize its" effect "on the environment and no longer be the biggest polluter."

Many companies using other materials

Patagonia, North Face and Timberland are among the companies now using natural materials to produce goods.

Italian company Frumat has developed a plant-based leather made from the waste created by apple juice makers.

Two Mexican developers, Adrian Lopez Velarde and Marte Cazarez, have created a leather they call "Desserto" using nopal cactus leaves. Cactus plants are of interest to new material developers because they can live in hot climates and poor soil.

Pinatex helps support farms in the Philippines by using waste from the pineapple harvest to create material that is sold to makers of shoes, clothing and other products.

And Bolt Threads, a company based in California, created Mylo, a mycelium-based leather that is used by companies like Adidas, Lululemon and designer Stella McCartney.

Kim Cook reported on this story for the Associated Press. John Russell adapted it for VOA Learning English.

sconce – n. an object that is attached to a wall and that holds a candle or an electric light

chandelier – n. a large, decorated light that hangs from a ceiling and has branches for holding many light bulbs or candles

doctoral –adj. related to the highest degree given by a university

integrity – n. the state of being complete or whole

textile – n. a material that is woven or knit

dismantle –v. to take an object apart or to break something down

acoustic – adj. of or relating to sound or to the sense of hearing

mat – n. a small piece of material used to cover the floor or ground

fashion –n. related to the industry of making things that people wear

insulation – n. a material or substance that is used to stop heat, electricity, or sound from going into or out of something : a material that insulates something