Designing an Alternative to Antibiotics

Update Required To play the media you will need to either update your browser to a recent version or update your Flash plugin.
By VOA
07 August, 2012

In nineteen twenty-eight a British scientist made a "chance observation." He noticed that some mold had grown in bacteria in a culture plate in his laboratory. Molds can do that. But this mold that had somehow gotten into the plate had the ability to kill the bacteria around it.

The scientist, Alexander Fleming, found that the mold was a member of a common group known as Penicillium. Fleming and two other scientists -- Ernst Boris Chain and Howard Walter Florey -- went on to win the Nobel Prize in nineteen forty-five. They were honored "for the discovery of penicillin and its curative effect in various infectious diseases." 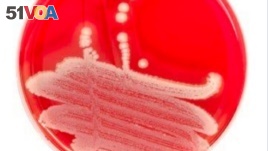 Researchers say anti-bacterial protein, PlyC could be effective antibiotic alternative
So scientists are searching for new ways to treat infections. Now, researchers in Australia say they have made an important discovery. Scientists at Monash University in Melbourne believe an antibacterial viral protein called PlyC could be used as an alternative to antibiotics.

This protein was first identified as a possible treatment for infections in nineteen twenty-five. But the research ended following the discovery of antibiotics.

Now, scientists have spent six years studying the structure of the protein. They have found how it kills the bacteria that cause sore throats, pneumonia and streptococcal toxic shock syndrome.

Australian researchers worked with scientists at the Rockefeller University in New York and the University of Maryland. Their findings appear in the Proceedings of the National Academy of Sciences.

Dr. Sheena McGowan from Monash University describes the protein as a powerful bacterial killing machine. She says it looks like a flying saucer carrying a pair of warheads. It connects to the surface of the bacterium and then cuts through the outside to destroy it.

Sheena McGowan says it could be highly valuable when conditions like pneumonia do not respond to traditional treatments.

SHEENA MCGOWAN: "There’s antibiotics at the moment for those particular types of diseases. We sort of see that there’s a bit of resistance being built up in the bacterial community almost, and some of our antibiotics aren’t quite as effective as they used to be. So this kind of ground route, basic research needs to be done quite early so that we have some time to develop them as safe human therapeutic over the timeframe when the antibiotics can keep working."

The researchers have been studying PlyC’s atomic structure to try to develop a drug. They say they have had success in treating streptococcal infections in mice. But an effective human treatment in the form of a pill or nasal spray may be at least ten years away.