Desperate Parents in Afghanistan Faced with Selling Their Children

Update Required To play the media you will need to either update your browser to a recent version or update your Flash plugin.
By Ashley Thompson
08 January 2022


In a large, simple settlement in western Afghanistan, Aziz Gul is fighting to save her daughter.

Her husband sold the 10-year-old girl into marriage without telling his wife. He took a down-payment so he could feed his family of five children. Without that money, he told his wife, they would all starve. He had to sacrifice one child to save the rest.

Many of Afghanistan's poorest people are making such decisions as their nation faces severe poverty. 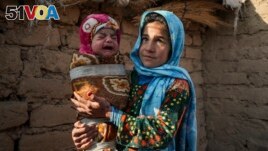 Qandi Gul holds her brother outside their home housing those displaced by war and drought near Herat, Afghanistan. Dec. 16, 2021. Gul's father sold her into marriage without telling his wife, taking a down-payment so he could feed his family. (AP Photo/Mstyslav Chernov)

The aid-dependent country's economy was already struggling when the Taliban seized power last August. The international community then froze Afghanistan's valuables overseas and halted all funding, unwilling to work with a Taliban government.

The effects of such actions have been devastating. Aid groups now say more than half the population faces severe food shortages.

"Day by day, the situation is deteriorating in this country, and especially children are suffering," said Asuntha Charles. She is national director of the World Vision aid organization in Afghanistan. The organization runs a health center for displaced people just outside the western city of Herat.

Charles said, "Today I have been heartbroken to see that the families are willing to sell their children to feed other family members."

Arranging marriages for very young girls is somewhat common throughout the area. The groom's family pays money to make the marriage happen. The child usually stays with her own parents until she is at least 15 years of age. Yet with many families unable to pay for even simple food, some say they would permit husbands to live with their very young daughters. Some are even trying to sell their sons.

But Gul is resisting. She herself was married off at 15 years old. She said she would kill herself if her daughter, Qandi Gul, is forcibly taken away.

Gul remembers well when she found out her husband had sold Qandi. For around two months, the family had been able to eat enough food. She decided to ask her husband how they were paying for the food. That is when he told her what he had done.

"My heart stopped beating. I wish I could have died at that time, but maybe God didn't want me to die," Gul said. Qandi sat close to her mother. "Each time I remember that night ... I die and come back to life. It was so difficult."

She asked her husband why he did it.

"He said he wanted to sell one and save the others. ‘You all would have died this way,' (he said.) I told him, ‘Dying was much better than what you have done.'"

Gul told her brothers and village elders that her husband had sold their child without telling her. They supported her. With their help, she received a "divorce" for her child, but only on condition that she repay the $1,000 that her husband received from the groom's family.

It is money she does not have. Her husband fled, possibly fearing Gul might denounce him to officials. The Taliban government recently announced a ban on forcing women into marriage.

The family her husband sold the girl to has already tried several times to claim Qandi, Gul said.

"If I can't provide money to pay these people and can't keep my daughter by my side, I have said that I will kill myself," Gul said. "But then I think about the other children. What will happen to them? Who will feed them?"

Gul's oldest child is 12. Her youngest is just two months old. Gul leaves the children with her mother while she goes to work in people's homes. Her 12-year-old son works picking saffron after school. He makes just enough to keep the family fed. But the saffron season is short.

"We don't have anything," Gul said.

displace - v. to force (people or animals) to leave the area where they live

saffron - n. an orange powder that is made from a type of flower (called a crocus) and that is used to color and flavor food