Developments in Exoskeleton Technology Could Help Some Walk Again

Update Required To play the media you will need to either update your browser to a recent version or update your Flash plugin.
By Susan Shand
12 June, 2018


An accident, a disease or other health problems leave more than 15 million people a year paralyzed. They have lost control of their legs and are unable to walk.

But new technology, along with physical exercise, could help some of them walk again.

Among the most promising developments is the use of robotic exoskeletons, like ones made by Ekso Bionics. The exoskeleton is worn on the user's back and around the stomach. 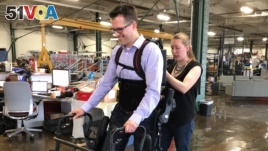 Patrick Wensing tests out an Ekso Bionics exoskeleton in his lab at the University of Notre Dame. He and his team are working to make the machines more intuitive. (Photo: Notre Dame)

Robotic ‘legs' with ‘feet' extend from both sides of the device and go around the user's legs. A video game-style controller connects to the device.

Lindsey Stoefen is working to recover from a rare disorder that has forced her to use a wheelchair since last October. She now does physical therapy with the exoskeleton for an hour a day.

The 17-year-old former athlete is a patient at the Marianjoy Rehabilitation Hospital in Chicago, Illinois. She climbed into a specially designed exoskeleton for the first time in late April.

Stoefen remembers being nervous. "Am I going to like it? Will I be okay?' she asked. But once she got into it, she loved it.

"For someone who takes a lot of energy to only walk a few feet, exo can get them up, can get them moving," Bularzik said. She added that it can improve a person's movements, and lets the person plan those movements.

Besides speeding up recovery times, these robotic skeletons are especially helpful for those suffering from paralysis, from spinal cord injuries or strokes. Using the machine can help some patients rewire their brains to use secondary muscles, so they can eventually walk again - without the device.

American scientists are leading the way with their work on wearable robots that help patients regain some or all of their movement. Patrick Wensing is an assistant professor of mechanical engineering at the University of Notre Dame in Indiana. He notes that exoskeletons have one major problem.

"While existing exoskeletons are very powerful, they don't understand what the user wants to do," Wensing said. He added that the user has to give the exoskeleton directions.

Wensing and his team are working with Ekso Bionics, the developer of wearable robots. Their goal is to build a simpler system. They hope to create a machine that can understand what its user wants to do without implanted sensors and complex controls.

The National Science Foundation's robotic program is providing support for the three-year project.

Taylor Gambon has spent the past year examining information from exoskeleton users and comparing it to models of everyday walking.

"What we're seeing is that slow walking in general, whether in the exoskeleton or just the human, is much different from walking at a (normal) speed," Gambon said.

Later this year, the team will travel to Ekso Bionics' headquarters, where they will work with exoskeletons to design programs for users with many disabilities.

paralyze – v. to make someone unable to move or feel all or part of the body

therapy – n. the treatment of physical or mental conditions

exoskeleton – n. a hard outer cover that supports and protects the body of an invertebrate animal such as an insect or a device that helps a paralyzed human