Scientists are developing a medical device that could tell them more about the human body, and help them develop more-effective treatments for cancer, heart disease and brain disorders.

It would be the world's first full-body PET scanner. PET stands for Positron Emission Tomography. PET scanners create 3-D images of what is happening in the body.

Researchers are calling the large scanner that they are developing Explorer. It will give medical workers images of what is happening in the entire human body that have never been seen before. PET scanners now give doctors images of only parts of the body. 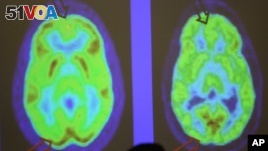 PET scanners displays areas of the body in different colors to show disease and conditions. A new PET scanner shows the entire body at once, rather just its parts, like the brain.

The U.S. National Institutes of Health gave a research team at the University of California at Davis $15.5 million to build the scanner.

Ramsey Badawi is a professor of radiology at UC Davis. He says the scanner will give researchers new information about how human organs work together.

"We're a system of organs and all the organs interact with each other. And we've never really been able to interrogate that with imaging before, and now we're going to be able to look at that."

X-rays and MRIs give images of bones and organs. PET scans show doctors how organs and tissues are working on a molecular level. These images help them identify and follow diseases. The new scanner will help them do that even better.

Simon Cherry is a professor of biomedical engineering at UC Davis. He says the PET scans can show the progress of both disease and medical treatments.

"With PET scans we're looking at function. We're actually able to say something about what the cells in the body are doing -- how actively they're metabolizing, for example, or how quickly they're dividing. Taking a cancer example, that could be tremendously powerful to see if, when you give a drug, whether that shuts down the metabolism of the tumor."

PET scans use a radioactive substance to find tumors. Professor Cherry says the Explorer uses a much lower amount of radiation than current PET tests, and creates images more quickly.

A complete view could help researchers develop new medicines that target diseases and parts of the body. It could help doctors reduce harmful side effects by following the movement of medicines through the body.

The researchers hope to test the Explorer with humans in three years.

Deborah Block reported this story from Washington. Christopher Jones-Cruise adapted it for Learning English. Jill Robbins was the editor.

device – n. an object, machine or piece of equipment that has been made for some special purpose

scanner – n. a medical device that is used to see inside something

interact – v. to act together; to come together and have an effect on each other (often + with)

X-ray – n. an image that is created by using X-rays and that is usually used for medical purposes

organs – n. a part of the body (such as the heart or liver) that has a particular function

tissue – n. the material that forms the parts in a plant or animal

function – v. to work or operate

molecular – adj. relating to the smallest possible amount of a particular substance that has all the characteristics of that substance

metabolize – v. to change (food) into a form that can be used by the body; to process and use (substances brought into the body) by metabolism

shut down – expression to stop the operation of something, especially when a special process is required

radioactive – adj. having or producing a powerful and dangerous form of energy (called radiation)

substance – n. a material of a particular kind

fraction – n. a (usually small) part or amount of something

side effect – n. an often harmful and unwanted effect of a drug or chemical that occurs along with the desired effect