Update Required To play the media you will need to either update your browser to a recent version or update your Flash plugin.
By Bryan Lynn
16 July 2021


Researchers say they have used brain waves of a paralyzed man who cannot speak to produce words from his thoughts onto a computer.

A team led by Dr. Edward Chang at the University of California, San Francisco, carried out the experiment. The study results were published July 15 in the New England Journal of Medicine.

"Most of us take for granted how easily we communicate through speech," Chang told The Associated Press. "It's exciting to think we're at the very beginning of a new chapter, a new field" to ease the difficulties of patients who lost that ability.

The researchers admit that such communication methods for paralysis victims will require years of additional research. But, they say the new study marks an important step forward.

Today, paralysis victims who cannot speak or write have very limited ways of communicating. For example, the man in the experiment used a pointer attached to a hat that lets him move his head to touch words or letters on a screen. Other devices can pick up a person's eye movements. But such methods are slow and a very limited replacement for speech. 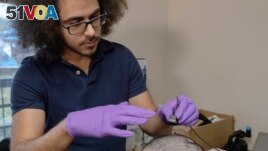 In this 2020 photo provided by the University of California, San Francisco, researcher David Moses works with clinical trial participant "BRAVO 1" to record brain activity while he attempted to produce words and sentences. (Todd Dubnicoff/UCSF via AP)

Using brain signals to work around disabilities is currently a hot field of study. In recent years, experiments with mind-controlled prosthetics have permitted paralyzed individuals to shake hands with someone or take a drink using a robotic arm. The process involves people imagining movements and those brain signals are sent through a computer to the prosthetic.

Chang's team built their experiment on earlier work. They developed a method called "speech neuroprosthetic." The process uses brain waves that normally control the vocal tract, or voice system. This includes the small muscle movements of the lips, jaw, tongue and larynx that form each consonant and vowel.

The person who volunteered to test the device was a man in his late 30s. He suffered a brain-stem stroke 15 years ago that caused widespread paralysis and left him unable to speak.

The researchers implanted electrodes on the surface of the man's brain, over the area that controls speech. A computer observed the patterns when he attempted to say common words such as "water" or "good." Over time, the computer became able to differentiate between 50 words that could form more than 1,000 sentences.

Repeatedly given questions such as "How are you today?" or "Are you thirsty," the device enabled the man to answer "I am very good" or "No, I am not thirsty." The words were not voiced, but were turned into text on the computer.

It takes about three to four seconds for a word to appear after the man tries to say it, said the study's lead writer, David Moses. He is an engineer in Chang's laboratory. While that rate is not nearly as fast as speaking, it is quicker than current methods.

In an opinion article published with the study, Harvard brain doctors Leigh Hochberg and Sydney Cash called the work a "pioneering demonstration."

The two doctors said the technology might one day help people with injuries, strokes or diseases like Lou Gehrig's. People with such diseases have brains that "prepare messages for delivery, but those messages are trapped," they wrote.

The researchers say their next steps will include seeking ways to improve the device's speed, correctness and vocabulary size. They also plan to one day develop a computer-produced voice that could replace text on a computer.

paralyzed – adj. unable to move or feel a part of the body

take for granted – phr. To value something too lightly

prosthetic – n. an artificial device that replaces a missing or injured part of the body

stroke – n. a sudden problem in the brain that changes the flow of blood and makes you unable to move part of your body

pattern – n. a particular way that something is often done or repeated

deliver – v. to carry or send from one place to another