Update Required To play the media you will need to either update your browser to a recent version or update your Flash plugin.
By VOA
05 April, 2019


American English, like any other language, evolves and grows over time.

To keep up with a changing language, Dictionary.com adds new words to its online search system each year.

This week, the site announced 300 new additions for 2019. Here in the studio with me is Kelly Jean Kelly. She has been looking into some of Dictionary.com's new additions. Today, we are going to introduce some of these new words and phrases. Hi, Kelly. Thanks for being here. 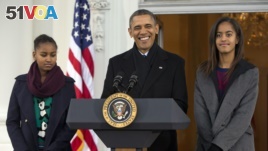 Ashley: Now, we will not be doing a deep dive or anything here. There is just not enough time in our workday to talk about all 300 new words!

Kelly: And, also, I have a flight to catch soon...

Ashley: You're right! A "deep dive" is a full, or thorough, study of a subject or issue. It is usually in the form of a long report.

Kelly: I hope our listeners don't have FOMO -- fear of missing out -- because we aren't going to teach them every new single phrase. FOMO is not one of Dictionary.com's latest additions. It's been in there for awhile. However, JOMO is a new one that is very close to FOMO.

Ashley: JOMO? That is one I have not heard. Please explain!

Kelly: JOMO is short for "joy of missing out." It is basically the opposite of FOMO! JOMO means you feel happy or at peace while doing your own thing, instead of worrying about what you might be missing out on.

Ashley: Huh, I like that one. It reminds you to stop comparing what you could be doing to what you are doing. But Kelly, JOMO is not really a word.

Kelly: Many of Dictionary.com's additions are not words in ...the traditional sense. JSYK.

Kelly: JSYK. Another abbreviation you can now find on Dictionary.com. It stands for: Just....So...You....Know. Just so you know.

Ashley: That sounds really weird to say in real life...just so you know, Kelly! It sounds more like internet speak.

Kelly: That is definitely where it comes from. You know, with all of these social media-inspired phrases, it seems like we might all want to cut back on our screen time. This phrase is another Dictionary.com addition. It's pretty easy to guess what it means. It is defined as "the amount of time a person spends watching or interacting on the screen of a computer, phone, television or gaming system."

Ashley: That's true, Kelly. A lot of us need to get offline more and pay more attention to our surroundings. Hey, speaking of....stop looking at your phone! We're doing a show here!

Kelly: I hate to tell you this, but I actually have to go. I'm going to miss my flight home!

Ashley: Womp womp. Too bad! We're only halfway done. See what I did there? "Womp womp" is a slang interjection that dismisses or makes fun of a loss or failure.

Kelly: So, you are saying you do not really care whether I make it home for my dad's birthday? Welp, that's it. I think we're done here!

Ashley: Welp! Good one. Welp comes from the very common interjection "well..." which is used to show displeasure or resignation about something happening...Oh, I might have pushed too far...I'm sorry.

Ashley: Bye, Kelly! Have a good trip! Hey, I hope you don't have to hear too many painfully unfunny dad jokes while you're home!

miss out - phrasal verb. to lose an opportunity : to be unable to have or enjoy something

abbreviation - n. a shortened form of a word or name that is used in place of the full word or name

slang - n. words that are not considered part of the standard vocabulary of a language and that are used very informally in speech especially by a particular group of people