Diet of North Koreans Has Changed Little in 50 Years

Update Required To play the media you will need to either update your browser to a recent version or update your Flash plugin.
By Christopher Cruise
08 February, 2015


A study of United Nations data shows the diet of North Koreans has changed little over the past 50 years. The American-based magazine National Geographic examined the information and reported the findings.

The magazine studied changes in diet from 1961 to 2011 in 22 countries, including North Korea and the United States. It looked at the average number of calories consumed in each country. Calories are a measure of energy in food. They can be found in the food we eat and the liquids we drink.

The study found that an adult in North Korea consumed about 2,103 calories a day in 2011. That represents an increase from 1,878 calories in 1961. But it is much lower than the 2,500 calories a day suggested by the UN Food and Agriculture Organization. 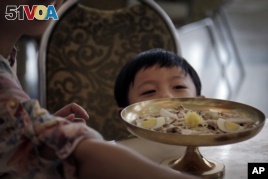 FILE - A young North Korean boy peeps over his serving of noodles at a restaurant in Pyongyang, Sept. 1, 2014.

The data also suggests the average North Korean has an unbalanced diet. National Geographic magazine says the diet of North Koreans is more dependent on grain than any of the 22 countries studied. In 1961, North Koreans got more than 70 percent of their caloric intake from single grains like rice, wheat and maize. Fifty years later, the percentage was 61 percent.

National Geographic reported that Americans ate the most among the 22 countries studied. It says Americans consumed an average of 3,641 calories a day in 2011. The world average was 2,870 calories.

This report was based on a story from VOA's Eunjung Cho. Jee Abbey Lee helped with reporting. This story was produced in cooperation with the VOA Korea Service. Christopher Cruise wrote the story in VOA Learning English. The editor was George Grow.

data – n. facts or information used usually to estimate or plan something

calories – n. a measure of the amount of energy that foods will produce in the human body

famine – n. a situation in which many people do not have enough food to eat; food shortage

Do people in your country have enough to eat? Do you eat a balanced diet? What kind of food do you eat the most? We want to hear from you. Write your thoughts in the comments section.