Different Ways to Pass and Fail

Update Required To play the media you will need to either update your browser to a recent version or update your Flash plugin.
By Anna Matteo
16 September, 2017


Now, the VOA Learning English program Words and Their Stories. On this show, we explore the origins and usage of common expressions in American English.

During September in the United States — and in many places around the world — children are going back to school.

Even if your school days have long passed, you may remember this time of the year well: the smell of books and pencils, the sound of your footsteps as you enter a strange classroom, the nervous feeling in your stomach as you meet your new teacher.

Naturally, we all want to do well in school and life. Sometimes we do, sometimes we don't. So, today we are going to talk about both. The expressions you will hear in today's program are commonly used in a classroom. But, they can also be used in other situations.

Now, as you probably know, a bomb is something that blows things up. In American slang, when something bombs, it fails completely. So, if you fail a test, you bombed it.

We also often use "bomb" this way when talking about movies, plays or performing. For example, if a comedian is on stage telling jokes but no one is laughing, you can say his jokes are bombing. Afterward, if you are feeling very mean, you could say to him, "Wow, you really bombed."

Now, let's say nobody goes to the new superhero movie, you can say it bombed at the box office. The box office is where people buy their movie tickets. In this case, they were buying tickets for a dud or a flop. These two words are often used to describe a form of entertainment that failed in its purpose -- to entertain. 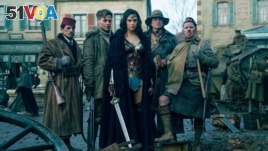 "Wonder Woman" is most definitely not a flop. The film grossed $103.1 million at the box office in North America during its opening weekend in 2017. (Photo Courtesy Warner Brothers)

Even a party that bombs can be called a dud or a flop. And if a class you are taking is boring or useless, you could call it a "a real dud."

Now, let's go back to bombing.

Please take note that when the word "bomb" is a verb, it means to fail.

As a slang expression, however, "the bomb" often describes something really good. For example, if a high school student wears a new pair of sneakers to school, his friends could say, "Those shoes are the bomb!" That means they are great -- in a cool, awesome kind of way.

But please be careful: using "the bomb" this way is extremely casual and would not be appropriate to use in a formal situation. For example, let's say your boss wears a new suit to an important meeting. It might not be a good career move to say to her, "That outfit is the bomb! You look awesome!"

And making comments about a bomb at a U.S. airport could get you arrested.

So, as we said, be careful!

Now, let's talk about expressions to use when you do something really well.

Let's say you did well on a test. You got 100% correct. You aced it! You can also say that you passed with flying colors.

The last expression might make you think of a big celebration — like maybe your parents celebrated your passing grade by lighting colorful fireworks.

But you would be wrong.

Word experts seem to agree that the expression "to pass with flying colors" comes from the military. In this case, "pass" doesn't mean to succeed, but to travel. And "colors" doesn't mean shades like red or blue, but flags.

According to the website The Phrase Finder, "pass with flying colors" originally describes winning ships sailing into port "with flags flying from all the mastheads." By around 1700, the phrase was being used to describe any kind of victory. 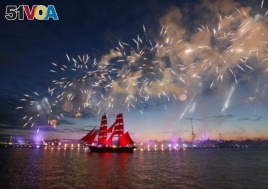 Some people do celebrate passing an exam with fireworks! Here, fireworks explode over a ship with scarlet sails on the Neva River during the Scarlet Sails festival celebrating school graduation in St. Petersburg, Russia, June 2017. (AP Photo)

That means you can use "pass with flying colors" when you are being graded on a test or course, but also in a situation that is out of your control -- such as a medical exam.

And that brings us to the end of this Words and Their Stories! We here at VOA Learning English hope you pass your next exam with flying colors — or at least we hope you don't bomb on your next project!

Do you have any slang expressions in your language to describe passing and failing? Let us know in the Comments Section -- where you can also practice using "bomb" or "pass with flying colors" in a sentence.

comedian – n. a person who performs in front of an audience and makes people laugh by telling jokes or funny stories or by acting in a way that is funny : an actor who plays roles that make people laugh

dud – n. something that does not do what it is supposed to do : something that is a complete failure : The movie was a box office dud. [=few people went to see the movie]

outfit – n. a set of clothes that are worn together

masthead – n. the top of a ship's mast

lighthearted – adj. having or showing a cheerful and happy nature