Difficult to Say Names in the News in 2022

Update Required To play the media you will need to either update your browser to a recent version or update your Flash plugin.
By Dan Friedell
26 December 2022


Do you know about the Ohtani rule?

Have you seen a movie with actor Domhnall Gleeson?

If you are a fan of Japanese baseball player Shohei Ohtani or Irish actor Domhnall Gleeson, you likely know how to say their names. 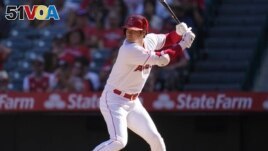 Both men were in the news in 2022. Ohtani got attention in the spring because America's professional baseball league introduced a rule change that many call the "Ohtani rule." They call it that because of his special skills. And in October, Domhnall Gleeson jokingly called out television show host Stephen Colbert for saying his first name wrong. (The right way to say it is DOH-null.)

In fact, their names are among the most mispronounced names of 2022. That information comes from The Captioning Group. The company puts real-time words under live news stories in the U.S. and Canada.

The group has released a "most mispronounced" list every year since 2016.

This year's list includes names like the Ukrainian city of Zaporizhzhia and Negroni sbagliato, an Italian alcoholic drink.

Zaporizhzhia is the city that is home to the world's largest nuclear power plant. Serious fighting between Russia and Ukraine took place in the area earlier this year. Russian soldiers took control of the power center. It was shut down in the autumn to avoid a major accident.

People often worry about mispronouncing a foreign name. But one expert, Esteban Touma, says it is a good thing that we live in a world where we hear and see new names and sounds.

Touma is a producer and teacher for the language learning company Babbel. He said seeing all the difficult names in the news "really shows the ways we interact with other languages and really gives a good grasp of what's going on in the world and how we connect with people abroad."

Another famous person, the singer Adele, recently said her fans have been saying her name incorrectly for many years. She said her name should sound like "uh-Dale." Of course, many fans said that is just how people with a British accent pronounce it.

Other mispronounced names in the news include athletes Tua Tagovailoa, the American football player, and tennis star Novak Djokovic. Tagovailoa was talked about because of a serious head injury he suffered during a game. Djokovic was in the news early in 2022 because he arrived in Australia to play in a competition but was not permitted to play because he was not vaccinated against COVID-19.

In the world of science, many people talked about a large crater in the Gulf of Mexico. It is called Chicxulub. Some say the crater was caused by an asteroid that led to the disappearance of dinosaurs.

And many people learned the correct way to say the capital city of Scotland during televised memorial services for Britain's Queen Elizabeth II. Many people say "ed-in-bor-o." But locals say "ed-in-BRUH."

live–adj. happening in the moment, not recorded

interact –v. to come together and have an effect on each other – such as during a conversation or meeting

grasp –v. to understand something that is difficult

accent –n. a way of pronouncing words that only occurs among the people in a specific area

crater –n. a large round hole in the ground caused when something crashes into land