Difficulties Continue for 'Temporary Protected Status' Holders In US

Update Required To play the media you will need to either update your browser to a recent version or update your Flash plugin.
By Gregory Stachel
14 August 2021


More than six months into the Biden administration, the future of a more than 30-years-old humanitarian program is being questioned. The lives of hundreds of thousands of immigrants depend on this program.

Temporary Protected Status (TPS) is given to nationals of some countries that are experiencing armed conflict or natural disasters. It was established by Congress in 1990. It permits recipients to live and work in the United States for a limited period.

The administration of former president Donald Trump sought to end temporary protection for nationals of some of these countries. This led to court challenges, and the future of the program was unknown.

The Biden administration extended TPS through executive authority, or decision by the president, and removed the immediate threat of deportations.

Julia Gelatt is a senior policy researcher at the Migration Policy Institute. She explained that a court challenge brought by the American Civil Liberties Union ended in required mediation. No one knows what the mediation will establish.

Oscar Chacon is the head of support group Alianza Americas. He told VOA by message that there is an active campaign to persuade the Biden administration to give new TPS placement for people from Guatemala, Honduras, El Salvador, and Nicaragua. This would include people who are already living in the U.S. 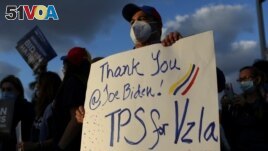 FILE - A man holds a sign as members of the Venezuelan community react after the Biden administration said it would give temporary protected status to Venezuelan migrants living in the United States, in Doral, Florida, March 9, 2021.

He said the decision would continue protecting individuals in the program and extend protection to others. He said that while most TPS recipients' immigration is safe for now, the disorder has affected the ability of some to renew work permits and receive other documents, like a driver's permit.

The situations that bring immigrants from these countries to the United States are as different as the countries they left.

Yanira Arias fled sexual violence and other problems in El Salvador. She arrived in New York in 2000 at age 27.

"It was not just a struggle to meet my needs, but also making sure that I arrived safe and alive at home [every day]. So, all that together was a lot of stress, and I made the decision to leave the country," she told VOA.

A year later, El Salvador had a large earthquake that left millions of people homeless. The U.S. government put the country in the TPS program.

Arias signed up for the program and was given protection. Now, she works for nonprofit groups that support Latina women, and immigrant communities.

TPS is typically renewed once every 18-months for nationals of El Salvador and other countries. Though Arias is thankful for the program, she says long-term planning is impossible.

She said, "I cannot invest in something permanent." And she is afraid of going back to a country where she "was almost killed."

October will be an important month for TPS holders. Court-ordered extensions of protections will end. Immigration supporters hope the Biden administration will establish new rules that protect immigrants in the TPS.

Chacon, Arias, and others are urging U.S. lawmakers to amend TPS and permit immigrants in the program to build long-term lives in the United States.

"We are [trying] to explain to members of Congress that regardless of having our extensions — and yes, we are not being served with an order of deportation — it is very hard to live this way," Arias said.

Senate Democrats are pushing to provide legal placement to possibly millions of undocumented immigrants. They are attempting to include the measure in budget legislation that will come up in the Congress soon. Immigrant supporters say TPS reforms should be added to the document.

It is unknown if immigration-related measures in the budget proposal can survive the legislative process. It is also unknown if the $3.5 trillion budget bill can pass with only Democratic support.

Aline Barros Daley reported this story for Voice of America. Gregory Stachel adapted it for VOA Learning English. Susan Shand was the editor.

regardless – adv. without being stopped or affected by (something)