Update Required To play the media you will need to either update your browser to a recent version or update your Flash plugin.
By John Russell
24 March 2020


As schools close because of the coronavirus outbreak, educators in specialized subjects are dealing with the difficulty of moving their classes online.

College classes in the sciences and arts often use laboratory work, performances or even travel to teach students important lessons.

Some of these classes require special equipment or the ability to gather in a group. For example, what does an engineering lab course look like online? How does a musical group practice? 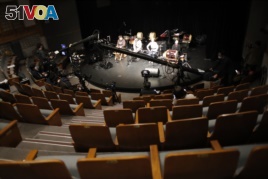 VOA Learning English spoke to educators across the United States recently. Some described the difficulty of moving classes online in economic or technical terms.

Tom Luer is a music professor at California State Polytechnic University, Pomona. He noted that his school has many students who do not have some kinds of technology or special equipment at their homes.

Lectures, reading assignments and class discussions are not too difficult to deal with, Luer explained. But, some kinds of lessons and performances are more difficult to do.

Aaron Sakulich is an engineering professor at Worcester Polytechnic Institute, in Massachusetts. He was going to lead a group of students on a project-based class in Armenia.

The students, each working with local non-profit organizations, were going to help develop solutions to problems facing their partners in Armenia. The students had spent months preparing for the project.

The trip was canceled. But the project-based class is continuing online.

For now, Sakulich has worked hard to find possible US-based partners to work with. He hopes students can still do interviews and research using apps such as Zoom.

"My primary concern has been how to keep the students motivated," Sakulich said.

Barbara Oakley is a professor of engineering at Oakland University and Coursera's Inaugural Innovation Instructor.

Oakley believes that the main goal for teachers is to transfer their skills. In other words, teachers used to working in a class will have to test their teaching skills in a new way.

Oakley strongly supports online education. But, she said that high-level, specialized kinds of study, such as lab work in engineering, is not easy to move online. She was quick to add that there is no simple answer for how to teach specialized subjects.

Although there are many problems, educators also see opportunities or bright spots in the sudden move to online education.

He wants to use different computer applications to work with his music students. For example, one app, Acapella, lets musicians in different places record different parts of a piece of music. Then, the app helps students put the different parts together, to create a single music track.

Even if students do not have computers or special recording equipment, they can still record simple sound files on their phones.

Oakley noted the importance of creativity in the move to online education.

In the field of engineering, she said, some of the best lab-based courses that she has seen teach important scientific ideas rather than specific lab work.

"Instead of perhaps going into some of the nuances of that particular lab, they will go into the nuances of what good science actually involves. And if you are doing good research, what does that involve? How can good research become bad research? And how can you avoid that? These are very important topics, but they are often not covered in lab courses."

Matt Otto has been involved in online education for more than 10 years.

Otto is a music professor at the University of Kansas. He believes that schools and educators will be able to find a way forward within a month or so. "Most teachers are problem solvers – that's what teaching is," he said.

Otto said that online education cannot always recreate the exact social environment of a college campus. He noted, however, that he has seen many online students have great success.

"People who think it's not a good method of teaching," he said, "maybe haven't done it. Because I've seen the outcomes."

One student, Xose Miguelez, studied online with Otto over a period of six years.

"One of my other students [Miguelez] from Spain went from being a hobbyist to being not only a professional, but he's got a position in a university and got the jazz album of the year in Spain this last year, in 2019."

Otto said that he has seen other students succeed while studying online. "I think that is a testament to how effective online teaching is," he said.

lecture – n. a talk or speech given to a group of people to teach them about a particular subject

opportunity – n. a chance to do something

outcome - n. something that happens as a result of an activity or process

hobbyist – n. an activity that a person does for pleasure when not working

effective – adj. producing a result that is wanted : having an intended effect