Update Required To play the media you will need to either update your browser to a recent version or update your Flash plugin.
By Bryan Lynn
14 November 2021


A new technology project in southern Greece is helping visitors experience the ancient birthplace of the Olympic Games.

The project used augmented reality to recreate temples and competition areas in the ancient city of Olympia. It was recently launched in the city, one of the world's major archaeological sites.

Augmented reality, or AR, is a technology that can project computer-created imagery onto special eyeglasses. Through the eyeglasses, the images appear along with other physical objects in the environment. 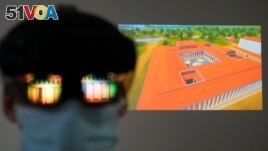 The image of an ancient temple is reflected on a mixed-reality HoloLens headset worn by museum technician Kostas Baskakis as a projection of Ancient Olympia is seen in the background at the Olympic Museum in Athens, Greece, Tuesday, Nov. 9, 2021. (AP Phot

The project is a partnership between American software maker Microsoft and Greece's Ministry of Culture and Sport. The ministry helped Microsoft map and build virtual representations of Olympia.

The city was used for nearly a thousand years to host the games in ancient Greece that served as the model for the modern Olympics.

"It's a milestone ... that helped us bring technology and culture and history together so we can preserve it," Microsoft President Brad Smith said in a video message at the launch event.

The experience provides users the chance to virtually walk through the ruins of Olympia.

At the Olympic Museum in Athens, people can also use Microsoft's AR headsets for a similar experience.

Greek Prime Minister Kyriakos Mitsotakis joined a group of schoolchildren who were using the app for the first time.

"I'm absolutely thrilled that we're able to present to the world a completely new cultural experience using technology to re-create the ancient world of Olympia," Mitsotakis told The Associated Press.

Students from a local middle school looked at statues and structures that were brought to life on their phones. They were able to virtually visit inside and outside settings to explore where ancient Olympians had competed in different sports.

One of the children, Panagiotis Christopoulos, called the project "impressive." "I think it can help with teaching in schools," the student said.

The project began 18 months ago with a series of imaging flights to help map areas across Olympia.

Microsoft is to build several data centers in and near Athens as part of a $1 billion investment agreement with the Greek government.

milestone – n. an important point in the progress of development of something

preserve – v. keep something the same or prevent it from being damaged or destroyed