Update Required To play the media you will need to either update your browser to a recent version or update your Flash plugin.
By Bryan Lynn
08 June, 2018


The skeleton of an extremely rare kind of dinosaur has sold for $2.3 million in Paris, France.

The 150-million-year-old bones sold during an auction June 4 at the city's famous Eiffel Tower. The company holding the auction said the buyer was a French art collector. The seller was identified only as a British businessman.

The skeleton is described as about 70 percent complete. It measures nine meters long and about two-and-a-half meters tall. The bones were discovered in 2013 in the western American state of Wyoming.

Scientists recognized the skeleton as belonging to a large, meat-eating dinosaur. But it has not been identified as a specific kind. Some scientists have said they believe it could be a new species.

The Aguttes auction house described the skeleton as being from the late Jurassic period. It has similarities to the Allosaurus meat-eating dinosaur group. Other Allosaurus skeletons have been discovered in the same area as the one sold in Paris. 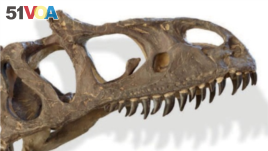 Scientists recognized the skeleton as belonging to a large, meat-eating dinosaur, but it was not identified as a specific kind. (Aguttes)

However, the auction company said that European paleontologists who examined the skeleton found major differences from known Allosaurus.

Eric Mickeler, a fossil expert, works for the auction company. He said the discovery marked "the high point" of his career because he believes the skeleton holds great scientific promise.

But the private sale of the fossil drew criticism from some scientific groups and individuals.

Before the auction, the nonprofit Society of Vertebrate Paleonotology wrote a letter to the auction company expressing its concerns. The U.S.-based group says it represents more than 2,200 paleontologists around the world.

The letter criticized Aguttes for claiming the skeleton provided evidence of new science and urged the company to cancel the auction.

The organization said it recognized that the fossil was legally collected and exported to France. But it added that "scientifically important vertebrate fossils are part of our collective natural heritage and deserve to be held in public trust."

The society argued that major discoveries sold into private collection could become lost to science. That is because there is no guarantee that privately held pieces will be open to all scientists for research purposes, the organization said.

Thomas Carr is a vertebrate paleontologist at Carthage College in the American state of Wisconsin. He told the website Live Science he thinks the auction house claims were "just hype" designed to get a higher price for the skeleton.

"It looks no different from any Allosaurus that I've ever seen," he said of the fossil.

Speaking to Reuters, auction official Claude Aguttes said the buyer had told him he considers the skeleton to be "amazing" and plans to "present it to the public."

"Everyone will be able to see it, it will soon be lent to a museum," Aguttes said. "It will be studied by scientists, everything is perfect."

Bryan Lynn wrote this story for VOA Learning English, based on reports from Reuters, Agence France-Presse and other sources. was the editor.

auction – n. sale in which things are sold to the person who offers the most money

species – n. a group of plants or animals that share similar characteristics

hype – n. a lot of attention given to something - especially in media – to make it seem more important or exciting than it really is