Update Required To play the media you will need to either update your browser to a recent version or update your Flash plugin.
By Jim Dresbach
09 July, 2016


For the first time ever, scientists have discovered a tumor in the remains of a dinosaur.

Researchers at the University of Southampton in England found the deformed jaw of a dinosaur. The smaller-than-normal dwarf dinosaur is called a hadrosaur. It is a duck-billed dinosaur.

The hadrosaur lived nearly 67 to 69 million years ago. It was found in what is called the "Valley of the Dinosaurs." That valley is in the Transylvania area of western Romania. 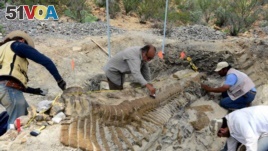 National Institute of Anthropology and History (INAH) workers and paleontologists work on the recovery of a fossilized tail of a duck-billed dinosour, or hadrosaur.

Dr. Zoltan Csiki-Sava was involved in finding the diseased hadrosaur. To investigate the tumor, her team was invited to Micro-CT scan the jawbone.

"The tumor in this dinosaur had not developed to its full extent at the moment it died," the doctor said. "[The tumor] could have indirectly contributed to its early demise."

Kate Acheson is a PhD student researcher at the University of Southampton. She said the duck-billed dinosaurs were at higher risk for tumors than other dinosaurs.

The tumor is known as an ameloblastoma. That is a benign non-cancerous tumor that is found in the jaws of human and other animals.

Researchers say the dinosaur likely did not suffer any pain during the early stages of the tumor. The dinosaur died before being fully grown. Researchers are not sure if the tumor caused the death of the hadrosaur.

The staff at VOA News wrote this story. Jim Dresbach adapted it for Learning English. Adam Brock was the editor.

dinosaur – n. one of many reptiles that lived on earth millions of years ago

duck-billed – adj. have a projecting jaw, or beak, like a duck

deformed – adj. not having the normal or expected shape especially because of a problem in the way something has developed or grown

hadrosaur – n. a planting-eating dinosaur with jaws flattened like the bill of a duck

benign – adj. not causing death or serious injury; without cancer