Update Required To play the media you will need to either update your browser to a recent version or update your Flash plugin.
By Anne Ball
01 May, 2016


Dinosaurs—those big prehistoric creatures— may have already been decreasing in population long before an asteroid crashed into the Earth, and killed them.

Until now, it was thought that an asteroid, or meteorite, that hit the Earth 66 million years ago was the main reason the reptiles became extinct.

But a new study finds that they may have already been decreasing in numbers millions of years before that.

Dr. Manabu Sakamoto is a dinosaur expert – a paleontologist – at the University of Reading in the United Kingdom. He led the research in the new study. 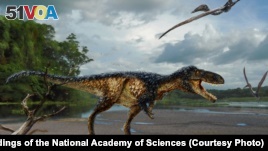 The fossilized remains of a new horse – sized dinosaur reveal how Tyrannosaurus rex and its close relatives became top predators, according to a new study published in the Proceedings of the National Academy of Sciences.

"We were not expecting this result," Sakamoto said.

The effect of the asteroid hitting the Earth is still considered the main reason for the dinosaurs' final disappearance, Sakamoto said. But, he added, "it is clear that they were already past their prime in an evolutionary sense."

In other words, Sakamoto means that dinosaurs were already starting to disappear from the land before the asteroid struck the Earth.

The researchers studied the fossil record. Fossils are remains of plants or animals that lived in ancient times that one can now see in some rocks.

Sakamoto called the results of the study "groundbreaking."

"Once again, it will change our understanding of the fate of these mighty creatures," Sakamoto said.

He also said that while the asteroid may have been what finally led to their extinction, "something else had already been preventing dinosaurs from evolving new species as fast as old species were dying out."

Sakamoto said this suggests that for tens of millions of years before they finally died out from the asteroid effects, dinosaurs were beginning to lose their position as the leading animals on Earth. Dinosaurs ruled the Earth for about 150 million years.

Mike Benton was the co-author of the new study. He is a paleontology professor at the University of Bristol. He said that dinosaurs had lost their ability to evolve – or change – quickly enough to deal with environmental changes on the planet. Some of these changes came from volcanic activity and the breaking up of continental landmasses.

When the asteroid hit the Earth, its force was so strong it blew rocks and dust and particles into the atmosphere, covering the Earth. That stopped the sunlight from reaching the ground, so plants could not grow. With their food supply gone, the dinosaurs died off too.

Some scientists believe the asteroid hit the Earth in an area that is now part of Mexico.

The study is published in the journal Proceedings of the National Academy of Sciences.

paleontologist – n. a person who studies the fossils of animals and plants that lived a long time ago, including dinosaurs

prime – adj. time when they are at their best

fate – n. a power that is believed to control what happens in the future