Could Dinosaurs Have Survived?

Update Required To play the media you will need to either update your browser to a recent version or update your Flash plugin.
By Jeri Watson
31 August, 2014


Dinosaurs last lived on Earth about 65 million years ago. For many years, scientists have debated how and why dinosaurs disappeared. But improved tools and records of fossil remains have led some experts to agree about the disappearance of these ancient creatures. We get more from Jeri Watson.

University of Edinburgh researcher Steve Brusatte led the team of experts. They blamed a huge rock from space – a 10-kilometer-wide asteroid -- for the dinosaurs' disappearance. Their findings appeared in the journal Biological Reviews.

"The asteroid did it. But that asteroid probably hit at a particularly bad time."

Mr. Brusatte and his team proposed that if the asteroid had struck the Earth a few million years earlier, the dinosaurs might have been better able to survive. By the time the asteroid struck, dinosaurs had already lost some of their strength.

"A lot of the big plant eating dinosaurs, those horned dinosaurs like triceratops, the bottom of the food chain dinosaurs, the base of dinosaur ecosystems, those dinosaurs had declined a little bit in their diversity."

He notes that dinosaur populations had grown and then decreased in number over 150 million years.

His team's report appears in the journal Biological Reviews. 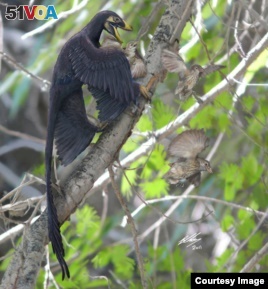 The feathered dinosaur Microraptor pounces on a nest of primitive birds. Both species lived around 120 million years ago in what is now northern China. Credit: Brian Choo

But some plants and animals DID survive through the period of dinosaur extinction. Another study looks at one group of dinosaurs that lived through the disasters. It shows how large cold-blooded, meat–eating animals like Tyrannosaurus Rex may have developed into small, warm-blooded birds.

Biologist Michael Lee works jointly with the South Australian Museum and the University of Adelaide. He was the lead writer of the study. He and his team centered their efforts on one group of dinosaur, meat-eating theropods. They examined 120 species.

One group of dinosaurs was evolving, changing four times as fast as all the other dinosaurs living during that period. And over time, the fast-evolving group became birds.

The scientists studied how those changes took place over 50 million years. They say that during that time, each generation got smaller and smaller. Michael Lee says that by the time the asteroid hit, the earliest birds had been living for about 100 million years.

"The bird ancestor started exploring a new kind of lifestyle which involved smaller body size, greater agility and greater ability to regulate their body heat using things like feathers and various other things.'

Mr. Lee said smaller body size was responsible for the changes. And that, in turn, it would have made way for changes in their body structure like the addition of wings and flight feathers. He also noted other changes seen in modern birds, such as wish bones.

extinction n., the state or situation that results when something such as a plant or animal species has died out completely

generation, n., a group of individuals born and living about the same time

journal, n., a magazine that reports on things of special interest to a particular group of people

fossils, n., things preserved that belonged to a plant, animal or bones that lived in ancient times.