Disasters in Myanmar May Delay Elections

Update Required To play the media you will need to either update your browser to a recent version or update your Flash plugin.
By VOA
15 October, 2015


An elections commission has asked Myanmar to postpone the national vote because of recent natural disasters.

The Union Election Commission wants the elections, set for November 8, delayed because of fatal flooding.

More than 100 people are reported to have died in floods in Chin State and the Sagaing Region.

About 1.6 million people have been "critically affected" because of recent flooding in Myanmar. That number comes from government agencies and the United Nations Office for the Coordination of Humanitarian Affairs. 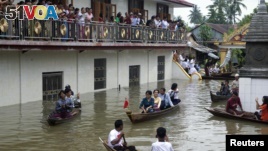 In an emergency meeting Tuesday, only the National League for Democracy of Aung San Suu Kyi objected to the delay, party officials said.

At least three parties have expressed support for the commission's proposal to delay the elections. They are the Union Solidarity Party, the Farmer's Development Party and the National Development Party. Observers reported that three other parties said they would let the commission decide when to hold the vote.

Several ethnic-based parties were invited to the emergency meeting, but did not attend.

The election commission earlier announced that the elections would not be held in hundreds of villages. Most of these villages are in Kachin and Shan ethnic areas, where armed groups continue to resist the central government.

Some observers suggest that one reason for a postponement may be political. Many observers believe the National League for Democracy will make major gains in the vote.

The election commission is expected to make a public announcement within the next several days. Some political leaders say they believe the group will push forward with delaying the vote.

The NLD won 80 percent of the legislative seats in the 1990 elections. But the military cancelled the election results and refused to surrender power. They kept Aung San Suu Kyi under house arrest for several years.

Under Myanmar's laws, the next election needs to be held 30 to 90 days before the first meeting of the next parliament. It is set for January 30.

More than 6,000 people are seeking positions in the national parliament and state or regional legislatures. The government has barred at least 75 independent or opposition party candidates, many because of the citizenship of their parents.

region – n. an area or part of a country or state

critically – adj. using or involving careful judgment about something