Update Required To play the media you will need to either update your browser to a recent version or update your Flash plugin.
By Anne Ball
17 September, 2017


For the first time, researchers have identified six genes that control the length of a pregnancy. And they say the genes may show whether or not a baby is born early.

Preterm birth -- when a baby is born too early -- is a large cause of disability and death among the very young.

Fifteen million babies worldwide are born too soon every year. Their lungs may be too small an d undeveloped. They struggle to breathe. Many of them die. For those who survive, problems from being born too early can affect them all their lives.

Preterm birth is the leading cause of death among children under the age of five years worldwide.

A pregnancy normally lasts about 40 weeks. An infant is considered full term if the baby is born after 37 weeks in the mother's womb. One study found that a small number of babies born at just 22 weeks gestation have survived with medical treatment. 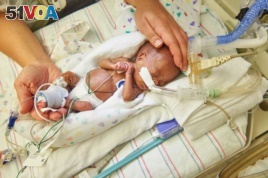 Now, a group of researchers may have found a way to understand the causes of this complex disorder.

The researchers looked at the genetic structure in 50,000 pregnant women. It was the largest study yet of DNA, or deoxyribonucleic acid. The study found six genes that seemed to control how long a baby would stay in the mother's womb.

Dr. Louis Muglia is the co-director of the Perinatal Institute at Cincinnati Children's Hospital Medical Center in Ohio. He helped organize the study, and explains what the researchers found.

"For the first time, we have the clues that are going to lead us to rational ways of understanding a woman's risk for preterm birth."

Dr. Muglia says scientists have known for a long time that preterm birth involves a combination of genetic and environmental causes.

One of the newly identified genes is involved in how the body uses the mineral selenium. Selenium is found in soil, seafood and meat. It is also sold in some stores, but not currently included in vitamin supplements women usually take while pregnant.

Selenium supplements are low-cost. If the results of the study are confirmed, this could save millions of lives.

Supplements such as folic acid have been shown to greatly reduce birth defects. Folic acid, a B vitamin, is added to food in many countries to help prevent health problems.

Another finding is that the cells lining a woman's uterus have a larger-than-expected influence on the length of pregnancy. 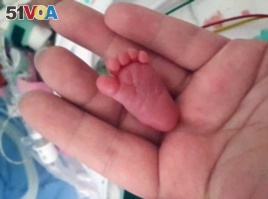 FILE: Baby Emilia's foot measured 3.1 centimetres in the birth. The baby was born in Germany and said to be the smallest ever born in the world who survived a premature birth.

This study showed that the genes thought to be responsible for the timing of the birth were from the mother.

"For the first time, we have an idea of what tissue in the mom is the one that's likely driving the one for preterm birth."

The March of Dimes provided money to help pay for the research. Stacey Stewart works with the non-profit group.

The study does not provide any immediate solution for stopping preterm birth. But the discoveries may lead to new ways to prevent this disorder.

A final note: the researchers only tested women of European ancestry. They compared their findings to information from three different studies in Finland, Denmark and Norway. The studies pointed to the same six genes. The next step is to expand the research to include women from other races and ethnic groups.

gestation – n. the time when a person or animal is developing inside its mother before it is born

womb – n. a woman's uterus where a baby is formed

DNA – n. deoxyribonucleic acid -- a substance that carries genetic information in the cells of plants and animals