Update Required To play the media you will need to either update your browser to a recent version or update your Flash plugin.
By Bryan Lynn
17 September, 2017


Most people do not have a high opinion of bats.

Bats often appear in movies and literature as terrifying creatures to be avoided.

The animals have even been linked in popular culture to vampires, seeking to attack and drink the blood of human victims.

In reality, bats are usually not a threat to people. Like other wild animals, some bats can carry the dangerous virus rabies. But bats can do good things for people and the environment.

For example, bats eat a lot of different insects that can harm our environment. They can also pollinate plants and spread seeds.

But a serious disease is currently threatening the bat population in many parts of the United States. The disease is a fungus called white-nose syndrome. It has killed more than 6 million bats across North America since 2007.

Bats catch the fungus through their skin while resting on the walls of mountain caves. Biologist Lindsay Rohrbaugh says the disease spreads quickly and can lead to strange behavior in bats.

"Bats are arousing more often than they are supposed to be during hibernation. And when they do that, they are unable to find food, and they unfortunately die."

In this Thursday May 8, 2014 photo, bats hang from the ceiling of the Aeolus cave in Dorset, Vt. (AP Photo/Wilson Ring)

In Washington D.C., researchers are studying how white-nose syndrome is affecting the area's nine species of bats. Some scientists are trapping bats on an island in the middle of the Anacostia River to test for the disease. The group is receiving federal money to help carry out their studies.

Marco Carvello is with the D.C. government's Department of Energy and Environment. He says scientists are concerned that the disease is continuing to greatly reduce the bat population.

"They typically have one pup a year when they reproduce. So, that's another reason that white-nose has been so detrimental. They don't have a lot of babies."

The bat deaths are affecting the quality of human life in many ways, according to Lindsay Rohrbaugh.

"Without bats, we are seeing an increase of mosquitoes and other pests that are decimating food sources for us. And I think that's only going to get worse over time if we don't find some way to protect the species that we have left." 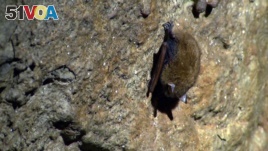 In this undated image from video, a bat suspected of having white-nose syndrome clings to a cave wall in Mammoth Cave National Park in Mammoth Cave, Ky. (AP Photo/Alex Sanz)

One theory is that some bats are no longer returning to caves to avoid getting sick. This means more of them are now making their way into cities, where contact with humans is more likely.

Experts advise people to keep away from bats in case they are infected with rabies. Instead, they say animal control officers should be called to come and safely remove the animals.

Veronica Balderas Iglesias and Erika Celeste reported on this story for VOA News. Bryan Lynn adapted their report for Learning English. George Grow was the editor.

vampire – n. dead person who leaves the grave at night to bite and suck the blood of living people

fungus – n. type of plant that gets its food from other living or decaying things

hibernate – v. to spend the winter sleeping or resting

cave – n. large hole naturally formed in the side of a mountain or under the ground

rouse – v. to wake up from sleep

pest – animal or insect that causes damage to plants or food