Update Required To play the media you will need to either update your browser to a recent version or update your Flash plugin.
By Bruce Alpert
23 April, 2016


A disease called "Panama" is threatening supplies of the world's most popular fruit – banana.

Two years ago, the United Nations warned that the "Panama disease" could destroy "much of the world's banana crop."

Since then, things have not gotten better. A new outbreak was discovered last year in Australia. The disease started in Asia in the 1990s, and later spread to Africa and the Middle East.

World health officials worry the disease could travel to Latin America, one of the top banana producers in the world. 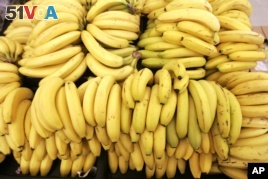 All this is a big concern because bananas are an important source of income and nutrients for millions of people. They are grown in 135 tropical nations.

The United Nations lists bananas as one of the most important foods, along with rice, wheat and corn. In 2011, farmers produced 107 metric tons, the UN said.

"No matter who you are, you'll enjoy the calming effects and positive vibes," the website says of the banana.

Concern in the banana industry

Randy Ploetz is a professor at the Tropical Research & Educational Center at the University of Florida. Many consider him as America's top banana expert, or, "top banana."

As he explained, Panama disease affects the Cavendish banana. The Cavendish is one of more than 500 kinds of bananas. But it is the most popular.

"The industry is waking up to the problem," Ploetz said. "They are pretty scared."

He was speaking Thursday by telephone from Miami, Florida, where he is among 1,000 people attending the International Banana Congress.

The meeting was supposed to take place in Costa Rica, but was moved at the last minute. There were concerns banana growers could spread Panama disease from dirt collected on their shoes, Ploetz said.

Ploetz said reports Cavendish banana production could end are not correct. But if the disease spreads to Latin America, it could hurt the world's economy along with food supplies for millions of people.

Robert Bertram is chief scientist for the U.S. Agency for International Development (USAID). He said bananas are important to many millions of people all over the world.

"In Africa, Asia and tropical America, bananas and plantains are an important food source for more than 100 million people," he told VOA.

Bertram said USAID is organizing a worldwide effort to stop the growth of Panama disease.

A fungus, known as TR4, causes the Panama disease.

Before 2013, Bertram said, it was limited to Asia – China, Indonesia, Malaysia, the Philippines and Taiwan. Since then, it spread to the Middle East – Jordan, Lebanon, Oman and Pakistan and to Africa, in Mozambique.

In the 1960s, the same fungus wiped out the ‘Gros Michel' banana crop, which at the time was the world's most popular. The Cavendish replaced it.

John McQuaid, author of "Tasty: The Art and Science of What We Eat" said some people think the Gros Michels "tasted better."

At Wageningen University in the Netherlands, researchers are looking for Cavendish replacements. Their work is difficult. Researchers said a replacement will have to resist Panama disease, and survive the shipping time needed to get bananas to stores thousands of miles away from banana fields.

And, yes, they will have to taste good.

We want to hear from you. Write to us in the Comments Section or share your views on 51voa.com. And do let us know if you like bananas and why.

banana – n. a long curved fruit with a thick peel that is yellow when it is ripe

outbreak – n. a sudden start or increase of a disease

top banana – n. the top person in a field

plantains – n. a greenish fruit that comes from a kind of banana plant and is eaten after it has been cooked

fungus – n. any one of a group of related plants, such as molds, mushrooms, or yeasts, that live on dead or decaying things

replacement – n. the act of replacing something