Update Required To play the media you will need to either update your browser to a recent version or update your Flash plugin.
By VOA
05 September, 2015


The United Nations Food and Agriculture Organization is urging farmers to be on guard against transboundary animal diseases. Officials warn that ticks, lice and other pests can spread quickly from one country to the next.

Experts from across Africa say trans-border diseases kill between 10 and 20 percent of the continent's animals every year. The experts gathered in Cameroon last month to discuss the problem. They suggested large vaccination and pest eradication programs to stop the spread of the diseases.

Dr. Taiga is Cameroon's livestock minister. He does not use a first name. He says pests like nose bot flies and wool maggots are harming animals in some communities in his country. 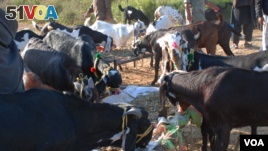 Experts say between 10 and 20 percent of animals in Africa die every year from ticks, lice and other pests.

Dr. Taiga says all animals in an area must be killed if one animal is affected because the diseases are contagious. They spread quickly from animal to animal. He says that is why the Food and Agriculture Organization (FAO) and the World Organization for Animal Health are working together to destroy the diseases. He says that when central African countries succeed in killing the pests, their human populations will enjoy better quality protein.

Sebastien Mongomo is an animal pest expert from Equatorial Guinea. He told the conference that diseases caused by pests have killed at least 10 percent of the sheep and goats in his country this year.

Dr. Mongomo says the borders between Cameroon, Gabon and Equatorial Guinea are largely unguarded. He notes it is difficult to control the movement of animals.

Pests can spread diseases and also cause health problems known as secondary infections. Some infections cause the animals to become very tired. They may not eat. Then they die.

Dr. Felix Njemi is an animal health officer at the FAO. He says the large number of animal deaths is worsening the food crisis in Africa, especially in countries south of the Sahara.

"The strategy is the large vaccination at the country level. Undertake surveillance to detect any case of the disease and strengthen collaboration between member nations and even between international institutions. Imagine somebody who has 10 animals and loses eight. The disease can have impact in food security."

Many poor people in African countries depend on goats and sheep for their livelihoods. The FAO says people become vulnerable to famine when pests attack and kill their animals.

Edwin Moki Kindzeka reported this story from Cameroon. Christopher Jones-Cruise adapted it for Learning English. George Grow was the editor.

pest – n. an animal or insect that causes problems for people especially by damaging crops or animals

eradication – n. the complete removal of something; the elimination or destruction of something harmful

contagious – adj. able to be passed from one person or animal to another by touching

undertake – v. to begin or attempt (something)

surveillance – n. the act of carefully watching or observing someone or something

detect – v. to discover or notice the presence of (something that is hidden or hard to see)

collaboration – n. the act of working with another person or group in order to achieve or do something

vulnerable – adj. open to attack, harm or damage; (usually + to)

Do insects affect animals in your country? We want to hear from you. Write your thoughts in the comments section.