Police have recovered the body of a small boy who was attacked by an alligator at Walt Disney World, say officials in Florida.

The attack took place Tuesday night as the boy played at the edge of a lake on the grounds of the Seven Seas Lagoon.

The boy and his family had gone to Walt Disney World for a vacation. They were wading in the water along a beach area when the alligator grabbed the boy. The boy was less than one meter from the shore when he was taken.

Demings said the boy's father tried – but was unable – to pull the two-year-old from the jaws of the alligator. The animal was reported to be longer than one meter. 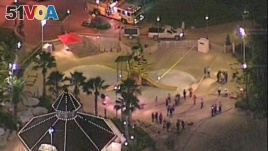 This image taken from video provided by courtesy of WKMG shows an area near where an alligator dragged a 2-year-old boy into the water near Disney's upscale Grand Floridian Resort & Spa in Orlando, Fla., June 14, 2016.

More than 50 people, including an alligator tracker, searched the area overnight. More searchers joined the hunt on Wednesday.

The Reuter news service says wildlife officials caught and killed five alligators to examine them for signs of the boy.

Officials say there have not been other alligator attacks at the lake, but signs in the area warned people not to swim. Beaches and docks along the man-made lake have been closed.

The lake is connected to other bodies of water near Walt Disney World by canals, and it feeds into another, larger lake.

Alligators are plentiful in Florida and many states in the southeastern part of the U.S. But experts say these kinds of attacks are not common.

Ten years ago, an alligator drowned a small boy at a lake outside of Orlando. The Associated Press reported that the alligator was found 20 hours later, still holding the boy in its jaws.

Dan Friedell wrote this story for Learning English based on reports from VOANews and The Associated Press. Kelly Jean Kelly was the editor.

What do you think about the alligator attack? We want to know. Write to us in the Comments Section or on 51VOA.COM.

wade – v. to walk through water

grab – v. to quickly take and hold (someone or something) with your hand or arms

tracker – n. a person who follows and tries to find (an animal) by looking for its tracks

canal – n. a long narrow place that is filled with water and allows boats to pass through and other signs that show where it has gone