Update Required To play the media you will need to either update your browser to a recent version or update your Flash plugin.
By Bryan Lynn
04 March, 2017


The Walt Disney Company has built a room that it says can wirelessly power and charge any devices inside it.

Wireless charging usually only works when a device is touching a power source. But researchers say they have found a way to provide wireless power and charging capability to large areas.

A scientific team from Disney Research recently demonstrated the technology. Alanson Sample is the lead researcher at Disney Research. He explained the goal of the project in a video.

"What we really want is a three-dimensional charging experience where you walk into your living room or office and your cellphone is charged simply by walking in."

Sample said the idea of wireless power goes way back to the turn of the 1900s. This is when famous scientific inventor Nikola Tesla proposed a method to send wireless power all over the world. His plan, which involved a giant tower built in New York, was not a success.

But the Disney team said it was inspired by Telsa's early efforts to develop a new system for wireless electricity. The process uses magnetic fields to send power to specially designed receivers. 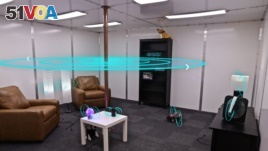 The Walt Disney Company says this room it built can wirelessly power and charge any devices inside it. (Disney Research)

Researchers built a 54-cubic-meter room in which the walls, floor and ceiling were covered with metal panels. They placed a long copper pipe in the middle of the room.

Electrical currents travel up and down this pole about 1.3 million times per second. These currents also move through the ceiling, walls and floor, before flowing again up the pole.

Small devices inside the pole set the level of electromagnetic waves. These waves continuously move around the room to send power to receiving devices.

The Disney researchers said repeated experiments led to successful wireless power transfers to many devices running at the same time.

One of the dangers of electric fields is that they can be harmful to humans. But associate research scientist Matt Chabalko said the level of power being generated inside the room is not dangerous.

"Our simulations show that we can transmit 1.9 kilowatts of power while meeting federal safety guidelines. This means it's completely safe for people to occupy this space for any amount of time."

The experiments also showed that furniture inside the room was not damaged and did not block the wireless energy.

Researchers say they believe the technology can be made to fit into small boxes or be used in large buildings.

One of Disney's likely uses for wireless power will be to create areas at its parks where visitors can charge their devices.

capability – n. ability or power to do something

three-dimensional – adj. having or seeming to have length, width and depth

copper – n. metal that allows heat and electricity to easily pass through it

simulation – n. something made to behave or look like something real, but which is not

occupy – v. spend time in a place or to live there