Update Required To play the media you will need to either update your browser to a recent version or update your Flash plugin.
By Jim Dresbach
17 June, 2016


The newest amusement park in China, Shanghai Disneyland, has opened. And so, the competition between it and Nanchang Wanda Park begins.

The Dalian Wanda Group company operates Nanchang Wanda Park. It opened at the end of May. Nanchang and Shanghai are about 600 hundred kilometers apart.

Both parks are large. Nanchang Wanda covers about 200 hectares. Shanghai Disney is about twice that. But its admission price is also twice as high. 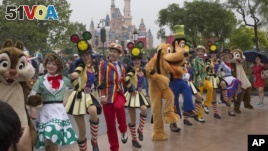 Performers take part in a parade at the Disney Resort in Shanghai, China, the day before its opening June 16, 2016. (AP Photo/Ng Han Guan)

The Wanda park says it has the largest roller coaster in China.

Both parks also have restaurants, hotels, shopping and live entertainment.

Richard Huang reports on China's entertainment industry for Nomura investment bank. He said there is room in the Chinese market for both Disney and Wanda to be successful.

Tourism is a $600 billion industry in China. Government officials expect that amount to double in four years, says a report from Bloomberg news.

The competition has already caused disagreement between the companies. When Nanchang Wanda opened last month, workers dressed as Disney characters performed at the park. Disney later warned that it is prepared to take action to protect the company's property rights.

Tiger Zou is a partner at a Chinese entertainment consulting business. He thinks Disney has an early advantage.

"... Disney has been increasing in influence with its success in the movie industry with films such as Frozen. This success...has helped Disney to earn its position with younger children," he said.

Elliott Weiss is a professor at the University of Virginia. He has studied Shanghai Disney. He said Disney is likely to face increasing difficulties as it builds its business in China.

But he praises the park's placement. Weiss said there are 330 million people within a three-hour drive from Shanghai Disneyland.

Both companies expect growth in China's economy. Disney expects 15 to 30 million visitors a year to its park. The Dalian Wanda group plans to open 15 theme parks and other sites for entertainment during the next four years.

Shannon Van Sant wrote this story for VOANews. Jim Dresbach adapted it for Learning English. Caty Weaver was the editor.

What do you think will be China's biggest tourism destinations in the next four years? We want to hear from you. Write to us in the Comments Section or visit our 51VOA.COM.

amusement park – n. a place that has many games and rides such as roller coasters and merry-go-rounds for entertainment

theme park – n. an amusement park where the rides and attractions are based on a particular theme

roller coaster – n. a ride at an amusement park which is like a small, open train with tracks that are high off the ground and that have sharp curves and steep hills

admission – n. the cost of entering a theater, sports stadium or museum