Displaced in CAR Struggle to Get Enough to Eat

Update Required To play the media you will need to either update your browser to a recent version or update your Flash plugin.
By VOA
26 May, 2014

The town of Bouar is about 450 kilometers west of Bangui, the capital of the Central African Republic. Thousands of people displaced by the violence in the country have come to the town seeking safety.

VOA reporter Bagassi Koura recently spent two weeks in the Central African Republic. She reports that Christians displaced by the fighting are struggling to get enough to eat. But the country's food crisis affects more than just people who fled the violence. Even if they are not displaced, many people in Bouar are hungry and need food aid.

Once a month, the United Nations World Food Program gives food to people in Bouar, people line up to wait for the food. Tensions grow as the hours pass. African Union soldiers are on guard near the line. 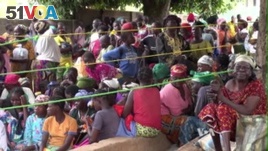 Madeleine Kim-Mboussa is among those waiting. She and her six children fled their village a few weeks ago after Seleka rebels attacked. She says that she could not stay in the village because the Seleka killed her whole family. That is why, she says, she came to Bouar.

Time passes, finally the wait is over for Madeleine Kim-Mboussa. A worker calls her name, and she gets her food. She is given 50-kilograms of rice, 10 kilograms of beans, and two liters of cooking oil.

Edwige Sonikpi says it's a war here, men rob us, they don't want to share, and we women are always the losers.

Madeleine Kim-Mboussa arrives home with all of the food she was given. She says if she had the food earlier, her children would not have suffered. But she also says she is pleased and happy, she says this is her lucky day. And she hopes she will be able to feed her family for another month.