Update Required To play the media you will need to either update your browser to a recent version or update your Flash plugin.
By VOA
03 April, 2015


Scientists in the Philippines are working to make changes to rice. They hope these changes will help solve one of the world's biggest health issues: the lack of Vitamin A.

It is called "golden rice" because the rice is yellow. It has been genetically changed, or modified, to produce beta carotene, a form of Vitamin A.

Opponents of genetically modified foods – including the environmental group Greenpeace – do not like what the scientists are doing. But supporters of golden rice say it could help save as many as two million lives a year. Young children and pregnant women can, and do, die from Vitamin A deficiency. 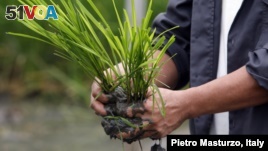 An agriculturist prepares to plant "Golden Rice" seedlings at a laboratory of the International Rice Research Institute in Los Banos, Laguna south of Manila, August 14, 2013.

Vitamin A is missing from the food of millions of people in the developing world. The deficiency is the leading cause of childhood blindness. It is a public health problem in half of all countries, including many in Africa and Southeast Asia.

Patrick Moore is an ecologist and former Greenpeace president. He supports production of golden rice. He says there should not even be debate about the issue while children starve.

Mr. Moore left Greenpeace in the 1980s and disagrees with many of its positions.

It said this agricultural model damages human health and hurts farmers and the environment.

Large companies do produce some genetically modified crops. They gain legal control of the plant production through patents. But in the Philippines, government and donor money is being used to develop golden rice in the Philippines. These groups hope farmers throughout the developing world will someday grow it. They hope it will help solve a problem that many scientists believe is as serious as malaria or tuberculosis.

Daniel Ocampo is a Southeast Asia agriculture expert for Greenpeace in Manila. He argues that golden rice is still not ready as a food for humans after 20 years of research. He says it could be more dangerous than its supporters will admit.

The International Rice Research Institute in the Philippines has been experimenting with golden rice for nine years. It says it has more work to do before the rice can be eaten by humans.

Simone Orendain reported this story from Manila. Christopher Jones-Cruise wrote it for VOA Learning English. Caty Weaver was the editor.

modify – v. to change some parts of something while not changing other parts

deficiency – n. a lack of something that is needed

consist – v. to have something as an essential or main part

herbicide-tolerant – adj. the natural ability of a species or plant to survive and reproduce after chemical treatment is used to destroy or stop growth

insect-resistant – adj. not easily harmed or affected by insects

What is your opinion on the genetic engineering of crops? We want to hear from you. Write your thoughts in the comments section.