Update Required To play the media you will need to either update your browser to a recent version or update your Flash plugin.
By Dan Novak
22 December 2022


Ukrainians have experienced nearly 10 months of war. This holiday season, people are trying to bring some peace and happiness to the country's children.

In what used to be a nice hotel near Kyiv, Ukrainian children shouted with happiness as they watched a special performance. They also were excited to open gifts.

The hotel outside Kyiv is now a rehabilitation center. It houses children who have experienced the terror of the Russian invasion. 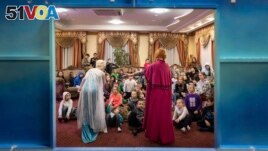 "When it's a holiday, it's easier," said Ksenia, a 12-year-old girl from Bakhmut. The center's officials asked not to use any child's last name for security reasons. Bakhmut, a city in eastern Ukraine, has been the center of a battle between the Russian and Ukrainian armies.

"We forget about the war. It's easier to distract," Ksenia added after the performance.

Ksenia was among the 62 children celebrating Saint Nicholas' Day on Monday. It is a traditional day when Ukrainian kids get presents. It also marks the beginning of the winter holiday season.

Artem Tatarinov is the director of the rehabilitation center. "Why do our soldiers fight?" he said. "For the sake of the future because without it, there will be nothing. And children are our future."

At the center, he said, there are children who have had to hide in shelters to escape bombs. Some have discovered their dead family members.

UNICEF estimates that at least 1.2 million out of Ukraine's 7 million children are currently displaced within the country.

The rehabilitation center houses children for two weeks. During that period, they get therapeutic lessons and spend time with mental health experts to try to process the war.

"It is like a temporary rehabilitation from the war," said Alevtyna, a mentor at the center.

For children, Alevtyna said, the center can be like an island of happiness. But it is not easy for them.

Over the past six months, the center has received more than 1,300 children from across the country.

"It is difficult to work like this when you see children who do not smile, when their childhood was taken away," said Tatarinov, the center's director. He said that he once met a 12-year-old boy who discovered the headless body of his brother after a strike. He was 10 meters away from their house.

"This is impossible to forget, but we do everything we can," added Tatarinov.

That is why this week, he and the mentors tried to celebrate the holidays. On Monday, the performance brought joy to the children for a short time.

"At least for an hour, but they can believe in miracles again, believe in goodness again, where fairy-tale heroes come," said Tetiana Hraban. She is head of the Golda Meir Institute of Civil Society. The group helped to organize the performance.

The actors on stage asked the children what they want for the holiday. The answers were shouted over each other: "A generator." "A power bank." "A house."

"Victory!" said one child, and all the others repeated it.

rehabilitation — n. bringing someone back to normal, healthy condition

distract — v. take attention away from something

mentor — n. someone who teaches and gives advice