Marrying someone from a different culture is very common. People do it all the time. And many international marriage brokers earn large profits by playing matchmaker for people. But what happens when the marriage business starts to resemble the selling of women? Some experts are examining the situation of migrant brides in South Korea.

Tens of thousands of South Korean men have married foreign women over the past 10 years. However, the government reports that many of those marriages end in divorce. And women's rights experts are concerned about how these immigrant women are being treated. They are asking the Korean government to make rules for these marriages.

Lee Soo-yeon is a Vietnamese migrant bride. Six years ago, she left Vietnam to marry a South Korean man. Now 36-years old, she works as a translator at a center for immigrant women in Asan, a city 48 kilometers south of Seoul. She speaks Korean and uses a Korean name, but Ms. Lee is no longer with her Korean husband. 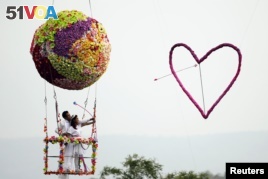 A couple in Thailand shoot an arrow through a heart on their wedding day. Unfortunately, many migrant brides in South Korea don't have such happy marriages.
"At first we could not communicate well. And later we began to fight a lot. He hit me. I do not hate him now, but I realized he has a drinking problem"

The couple's young child now lives with Ms. Lee's mother-in-law. She says it is unlikely she will reunite with her husband. She blames the marriage agency that introduced them in Vietnam.

"Marriage agencies do not provide any information about the men they introduce to the women. We need to know more about these men, their personalities and their financial stability."

Divorces among international couples are on the rise. As a result, the South Korean government has made new rules for giving marriage visas. There are new financial requirements and the couple must demonstrate that they can actually talk to each other.

Chung Chin-sung is a sociology professor at Seoul National University. She advises the Korean government on multicultural family policy. She says a language requirement could help improve marriages. But, she adds, the new visa rules do not deal with the main problem of these marriages. She says women are being sold like a product.

"That kind of marriage market where, especially women, become a product, like a product, not a human being, should be corrected."

Ms. Chung suggests banning agencies that arrange quick marriages between people who barely know each other.

Jolly Regacho is a counselor at the Asan migrant center. She says if the South Korean government really wants to make stronger marriages, more education is important. The husband, she feels, should also learn about his wife's culture.


"They should also make a project for the husband to learn the culture of their wife as well."

Even with the break-up of her marriage, migrant bride Lee Soo-yeon says she does not plan to go back to Vietnam. She says Korea is her new home.

This report was written by VOA reporters in Korea, Jason Strother and Malte Kollenberg.

What do you think about the situation of migrant brides and international marriages?
Do you think the Korean government should regulate this industry? Let us know in our comment section where you can share your opinions and discuss the issue with other listeners.
Related Articles
go top