Update Required To play the media you will need to either update your browser to a recent version or update your Flash plugin.
By Hai Do
12 January 2022


Serbian Novak Djokovic said he made an "error of judgment" when he had COVID-19 last month but did not isolate. The world's top tennis player also blamed his support team for a mistake in his Australian visa.

Djokovic is chasing a record-breaking 21st Grand Slam victory at the Australian Open. He is currently in a three-way tie for Grand Slam wins with Spain's Rafael Nadal and Roger Federer of Switzerland.

On Monday, Djokovic won a legal action about his visa which permitted him to stay in Australia. His lawyers told the court that the Serbian tennis star received a medical pardon, or exemption, from vaccination following his positive COVID test on December 16. 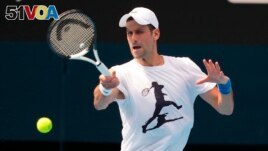 In this photo supplied by Tennis Australia, defending champion Serbia's Novak Djokovic practices in the Rod Laver Arena ahead of the Australian Open at Melbourne Park in Melbourne, Australia, Tuesday, Jan. 11, 2022.

Australia has one of the world's most restricted visa policy linked to COVID-19. The country's immigration officials say they are still examining Djokovic's medical exemption. They can cancel his visa for health and safety reasons.

In his visa request, Djokovic declared that he had not traveled anywhere in the 14 days before his arrival in Australia. But he was seen in public in Spain and Serbia during that period.

Djokovic said in social media posts that his support team was responsible for the incorrect information on his visa. "This was a human error and certainly not deliberate," he wrote, adding, "my agent sincerely apologizes for the administrative mistake."

Giving wrong information on Australian entry documents is a criminal offense. It could bring jail time, a fine and visa cancellation.

Djokovic also had to answer questions on his public appearances around the time of his coronavirus infection.

On December 17, Djokovic shared photos on Twitter of a ceremony in Serbia where he was the guest of honor. He also attended a tennis event with children in Belgrade without wearing a face covering. The next day, the infected tennis star met with reporters from the French newspapers L'Equipe.

Djokovic denied media reports that he knew he was infected when he attended the tennis event with children.

"I was asymptomatic and felt good, and I had not received the notification of a positive PCR result until after that event," he said.

As for the meeting with L'Equipe, he wrote, "This was an error of judgment." He added that he should have postponed the event.

Serbia generally requires those who are infected with COVID-19 to isolate for eight days.

Many Australians are angered that Djokovic has been exempted from vaccination so he can play in the Australian Open. Australia has spent more time in lockdown than any other country. And currently there are a record number of COVID cases in Australia.

Dr. David Edgar objected to the exemption in a letter to Melbourne's The Age newspaper. He called Djokovic an "ignorant, arrogant, selfish individual who has no good reason to not be vaccinated?"

Two Australian reporters from Seven West Media also condemned Djokovic while they were live on television. The reporters did not know that the camera was on at the time.

If Djokovic is permitted to stay and play in the Open, there might be anger from tennis players, too.

The Association of Tennis Professionals says 97 of the top 100 male players are vaccinated. And, Tennys Sandgren, the world's number 93 player did not take part in the Australian Open because he did not meet the two-shot vaccination requirement.

Marton Fucsovics lost to Djokovic at Wimbledon last year. He told Hungarian media, "(The) rules were outlined months ago, namely that everyone should vaccinate themselves, and Djokovic didn't." He added, "From this point of view, I don't think he would have the right to be here."

World number 140 Joao Sousa, is trying to qualify for the main draw this week. He said it was difficult for other players to accept that Djokovic could play without being vaccinated.

"It is a bit selfish from him to arrive here as the only player unvaccinated," Sousa told Portuguese news site Bolamarela. "He is finding a way around those rules."

Hai Do adapted this story for Learning English based on Reuters and Associated Press news reports.

positive - adj. showing the presence of a particular ger, condition or substance

arrogant - adj. having or showing attitude that they are better or more important than other people

selfish - adj. having or showing concern only for yourself