Update Required To play the media you will need to either update your browser to a recent version or update your Flash plugin.
By Dan Friedell
13 September 2021

The men's final placed the two top tennis players against each other: Djokovic is number one in the world; Medvedev is number two. Djokovic was seeking a record at the event. He hoped to win the first Grand Slam since Australian Rod Laver did it in 1969.

In tennis, the Grand Slam means winning all four major tournaments in the same year. Djokovic won the first three: the Australian Open, the French Open and Wimbledon.

But, it was not to be. The 25-year-old Medvedev won in three sets, each six to four. The Associated Press described his performance as "seemingly effortless" with "pinpoint serving." 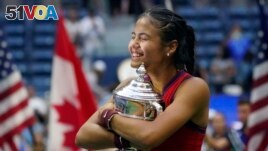 Emma Raducanu, of Britain, hugs the US Open championship trophy after defeating Leylah Fernandez, of Canada, during the women's singles final of the US Open tennis championships, Saturday, Sept. 11, 2021, in New York.

It was the first major championship for Medvedev. After his win, he praised the 34-year-old Djokovic.

"I've never said this to anybody, but I'll say it right now: For me, you are the greatest tennis player in history."

Medvedev said defeating such a player made him feel more sure about his future in the sport.

Djokovic was brought to tears by the end of the match. He also praised Medvedev.

"Just congratulate him, full credit from his mentality, his approach, his game, everything."

As to his own play, Djokovic said he knows he could have and should have played better. "Just energy-wise, I felt slow," he added.

He also thanked the tennis fans who came to Arthur Ashe Stadium to see the match. Due to the COVID-19 pandemic, fans were not permitted in 2020.

The victor, Emma Raducanu, had played in her first professional tournament only three months earlier. Raducanu's win was called "improbable."

She is the first U.S. Open women's champion to come out of the group of qualifiers. Qualifiers are players who are not guaranteed a chance to be in the tournament. She had to play three matches just to get into the main part of the two-week event. Next, Raducanu had to win six more times to reach the final.

She won every set she played, becoming the first to do so since Serena Williams in 2014.

Raducanu was born in Canada and moved to Britain as a small child. She is the first British woman to win a major singles tournament since 1977.

At 18, Raducanu is also the youngest Grand Slam tournament winner since 2004.

Fernandez is 19. She entered the match as the 73rd-ranked player in the world. She was an unlikely opponent in a tournament that included top-ranked players including Naomi Osaka and Ash Barty. Before this year's U.S. Open, Fernandez had never made it past the third round of a major tournament.

The last time the two women had played was during the Wimbledon junior tournament in 2018.

Raducanu's win came with some worry, and some blood. She went to the ground trying to return a shot from Fernandez late in the second set and hurt her leg. The umpire stopped the match so she could get medical treatment.

When she returned, she won the next game, and the match.

"I can't believe it," Raducanu said.

With the win, she earned $2.5 million and a congratulatory message from Queen Elizabeth, who called the victory "a remarkable achievement at such a young age."

The next major tournament is the 2022 Australian Open, which opens on January 17.

Dan Friedell adapted this story for Learning English based on reports by Howard Fendrich of the Associated Press. Caty Weaver was the editor.

What did you think of the final major of the 2021 tennis season? Tell us in the Comments Section and visit 51VOA.COM.

approach –n. a way of dealing with something : a way of doing or thinking about something

umpire –n. a person who controls play and makes sure that players act according to the rules in a sports event (such as a baseball game or a cricket or tennis match)

remarkable –adj. unusual or surprising : likely to be noticed

achievement –n. something that has been done or achieved through effort : a result of hard work