Update Required To play the media you will need to either update your browser to a recent version or update your Flash plugin.
By Anna Matteo
03 October, 2016

We begin with bad news for people who bought a wearable fitness tracker in hopes of losing weight.

A new study finds the electronic device probably does not help with weight loss. 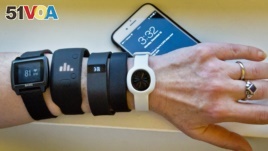 Fitness Trackers are wearable devices made to help you lose weight. But do they work? (AP Photo/Bebeto Matthews)

The study was a project of researchers from the University of Pittsburgh in the U.S. state of Pennsylvania.

Fitness trackers are designed to record your physical activity. They are usually worn around the wrist, where they measure a person's heart rate.

The University of Pittsburgh research team looked at two groups of individuals. The first wore a fitness tracker and took part in health counseling. In other words, they spoke with nutrition and physical fitness experts to consider the best weight loss plan.

The researchers compared this group with people who only took part in health counseling.

John Jakicic is the lead researcher. He is also chairman of the university's Department of Health and Physical Activity. He questioned the use of electronic devices as tools for weight control in place of "effective behavioral counseling for physical activity and diet."

The study involved 470 subjects between the ages of 18 and 35. Some of them were overweight, while others were heavier and considered obese. Over three fourths of the subjects were women, and 29 percent were minorities.

The researchers told all the subjects to increase their physical activity. The men and women also were told to start on a low calorie diet.

The subjects were told to have their weight measured once every six months over the two-year study.

After six months, researchers divided the group into two parts: one continued with monthly counseling, while members of the other group were given a wearable fitness tracker.

However, when it came to losing weight, the people who spoke with experts lost nearly twice as much weight.

Jakicic said the study's findings "are important because effective long-term treatments are needed to address America's obesity epidemic." He warned that "questions remain regarding the effectiveness of wearable devices."

More information is needed, he adds, to learn how to best use these devices to change "physical activity and diet behaviors" in adults who want to lose weight.

The researchers published their findings in The Journal of the American Medical Association.

Matthew Hilburn reported this story for VOANews. Anna Matteo adapted it for Learning English. George Grow was the editor.

fitness ­– n. the quality or state of being fit

tracker – n. a device that is aware of a fact, progression or condition

counseling – n. advice and support that is given to people to help them deal with problems, make important decisions, etc.

composition – n. the way in which something is put together or arranged : the combination of parts or elements that make up something