Do Student Athletes Have Any Power?

Update Required To play the media you will need to either update your browser to a recent version or update your Flash plugin.
By VOA
14 November, 2015


Several weeks of student protest and a six-day hunger strike over the handling of racial tension on a college campus resulted in nothing.

Last weekend, a group of black football players at the University of Missouri joined the protest. The student-athletes tweeted that they would not play until the university's president resigns.

Tim Wolfe, the president of the University of Missouri, quit the next day. 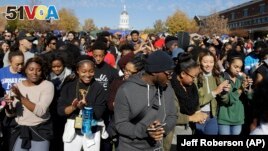 The student-athletes' action is part of a growing movement around the U.S. Student athletes increasingly find they have the power to demand changes in their relationship to their schools.

College football players often get scholarships and some benefits, like health insurance, from their schools. At one time, many thought that they received a "free education" in exchange for playing a game.

The National Collegiate Athletic Association, or NCAA, controls college sports. NCAA rules say the time spent on sports should not be more than 20 hours a week. But many spend more time on sports than on studying.

Kain Colter was a football player at Northwestern University. He said playing college football takes up 50 hours a week or more. He gave up plans to study medicine because he did not have time to study. At some universities, athletes take easy classes so they can pass without spending much time on study.

The principle of amateurism in college sports says student-athletes are amateurs. They cannot earn money to play the game like professional athletes do.

The NCAA itself earned $10.8 billion in 2013 for broadcast rights of college games. It even sold a video game using college players as game characters. Two groups of college football players brought antitrust lawsuits against the NCAA and won $40 million dollars in a 2014 decision.

Stanford University Economic Professor Roger Noll writes about the economics of college sports. He says that college coaches receive the money that in professional sports "would have been paid to the players ... If we go back to 2000, it was unusual to have any coach make more than a million dollars a year, but now we have a whole bunch of them making five million."

Noll says that the money creates an environment "where the athletic directors and the coaches end up running the university and they are the main beneficiaries of all the money that's coming into the sport."

Attempt to form a union

In 2013, football players from Northwestern University questioned the system where coaches earn up to $5 million a year and the students play for free. The student-athletes tried to start a union. They wanted to receive payment like employees of the university.

The National Labor Relations Board (NLRB) said in August that it cannot decide to accept the union. A higher court, perhaps the U.S. Supreme Court, will have to decide the case.

Changes in the system

Some of the student-athletes' demands have brought small changes to the system. Starting this year, a school can give a small amount of money to student athletes to help pay their "Cost of Attendance." The average yearly payment is between $2,000 and $3,000. That does not compare to the million-dollar salaries that professional athletes earn.

ESPN college basketball analyst Jay Bilas says players will have to go on strike, or refuse to play, to get what they want.

"You have a multi-billion dollar business here, and the athletes are being treated like they are somehow high school or little league players. That's obviously not the case. When you are selling these players for billions of dollars, they are professionals ... The players at some point are going to have to decide that their leverage is in playing all together. The players are ultimately going to have to walk to get what they want."