Do You Feel Stuck in 'Groundhog Day'?

Update Required To play the media you will need to either update your browser to a recent version or update your Flash plugin.
By 51VOA
29 January 2022

February 2 is known as Groundhog Day in the United States. On this day, so the old story goes, the groundhog wakes from its winter sleep and leaves its underground home. If the groundhog makes a shadow when it surfaces, winter will continue for six more weeks. But, if no shadow appears, spring will start early.

Groundhog Day is also a popular American film from 1993. Actor Bill Murray plays a selfish and mean reporter. He doesn't want to go to a small town and report on the seasonal prediction of its famous groundhog. So he is angry and insults everyone as a result. 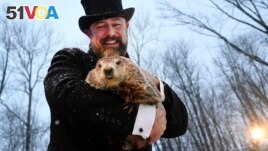 To learn his lesson, he gets trapped in time and has to relive the same Groundhog Day over and over and over. He is freed only after he learns to treat people better.

Because of that movie, "Groundhog Day" has become its own term in English. If the same bad thing keeps happening to you, or if you feel like you're stuck in a bad dream – you can say you're having a Groundhog Day.

Here is an example. I went to a new restaurant and the food tasted bad. But I gave them another chance. I went back again, but the food was just as bad. When it happened a third time, I felt like I was trapped in Groundhog Day.

There is another word, a French word, that is commonly used in English to express a similar idea -- déjà vu.

Déjà vu is a feeling that you have seen or heard something before. As déjà vu in French means "already seen," it makes sense that we use it that way too.

When we get déjà vu, we feel like we are experienced something that has already happened. And that can feel spooky.

When it happens, we often just stop talking and say, "Déjà vu! This has happened before, and I know what's going to happen next!"

A: Hey, are you going back to the office soon?

B: I thought so. But then we were told that we'd be working from home a bit longer.

A: How do you feel about that?

B: Well ... I'm used to working from home. But something different would be nice too.

A: I totally agree! I feel like one day is the same as the next.

B: Same here. I feel like I'm stuck in a Groundhog Day! I wake up and I feel like I've been in the same day for ... nearly two years!

A: Well, just make sure to build some variety into your day. Change things up! I do different kinds of exercise on different days. And one day a week I try out a new meal.

B: Good advice. Anything to break the monotony.

A: And remember ... you are not alone. Many people around the world are in the same Groundhog Day together!

Hey! Déjà vu! I feel like I've said that before!

shadow – n. the dark figure cast on a surface by a body that is between the surface and the light