Do You Know This Blizzard of Winter Words?

Update Required To play the media you will need to either update your browser to a recent version or update your Flash plugin.
By Anna Matteo
30 January, 2016


Hello and welcome to the VOA Learning English program Words and Their Stories!

People all over the world love to talk about the weather. Today, we talk about expressions that come from extreme winter weather.

Winters in the northern United States are cold and snowy. Sometimes, the snows come with extremely strong winds. These snowstorms are called blizzards.

It is difficult to see through the fast blowing snow of a blizzard. So, they are often described as blinding.

The dictionary Etymology Online says blizzard came to mean a severe snow storm during the late 1800s. Before then, the word blizzard had nothing to do with snow. It had several other meanings. One was a sharp blow, like hitting a ball with a stick. Another meaning was a gun shot. And blizzard was also defined as a most extreme statement or event. 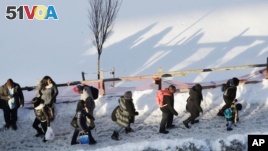 Commuters walk past piles of snow at the Broadway Junction transit hub, Monday, Jan. 25, 2016, in the Brooklyn borough of New York. East Coast residents who made the most of a paralyzing weekend blizzard trudged into the workweek Monday amid slippery roads, spotty transit service and mounds of snow that buried cars and blocked sidewalk entrances. (AP Photo/Mark Lennihan)

These days, we do not use blizzard to mean any of those things. Blizzard is only used to mean an extreme snow storm.

The first such use was in 1870. An especially violent and heavy snowstorm struck the state of Iowa. This storm was the worst winter storm in a long time. A newspaper editor in a small Iowa town called the terrible storm a blizzard.

Much like a blizzard, the use of the word blew across the country over the next few years. Just as snow sticks to the ground, the word blizzard stuck as meaning any really bad winter storm.

Snow changes the world around us. When snow is falling, the world seems somehow soft, peaceful and quiet.

But blizzards are different. They can be dangerous.

Blizzards create white-out conditions. A white-out is when snow is falling fast and winds drive the snow so much that is impossible to see. Driving a vehicle in driving snow can be deadly. Cities sometimes declare a temporary state of emergency. This tells people to stay off the roads. This prevents accidents and also lets the snow removal trucks do their work.

Deep, heavy snow is difficult to move. Clearing snow from roads and sidewalks is hard work. During a blizzard, people often get snowed in. They cannot leave their houses because snow drifts block doorways.

People who stock up on food and supplies are better prepared to deal with a blizzard. They hunker down -- or remain in their homes for many days. Often before a blizzard, people panic shop. Stores see a run on things like bread, milk, eggs and toilet paper – all classic blizzard supplies.

Even though blizzards can be dangerous, some people still enjoy the excitement caused by this extreme weather.

But no one likes to be snowed.

Snow as a verb means to tell someone many pleasant but false statements. This action is also called a snow job. If someone tries to snow you, you could say they are being cold, meaning their actions are rough, mean or unfeeling.

Blizzards may be hard to see through. But if you are smart, snow jobs are not. For example, if someone tells you that you can learn English without working hard, they are trying to snow you.

But listening to VOA Learning English is a good way to help your English studies. And that is no snow job.

["The Blizzard," by Jim Reeves, is sung in the background.]

Do you have blizzards where you live? Monsoons? Typhoons? Let us know in the Comments and on 51VOA.COM.