Update Required To play the media you will need to either update your browser to a recent version or update your Flash plugin.
By Dan Novak
27 October 2021


The World Bank halted aid to Sudan on Wednesday after the military's capture of power from the transitional government.

Meanwhile, state oil company workers and doctors in Sudan said on Wednesday they were joining protests against the military takeover.

A group of community organizations in the capital Khartoum has announced plans for more protests Saturday. They said it would be a "march of millions."

The announcement by the World Bank comes after Sudan's transitional government had gained about $2 billion in financing in March.

"I am greatly concerned by recent events in Sudan, and I fear the dramatic impact this can have on the country's social and economic recovery and development," World Bank President David Malpass said in a statement from Washington.

In one area of Khartoum on Wednesday, a Reuters reporter saw soldiers and armed people in civilian clothes removing barriers built by protesters.

A few hundred meters away, young people built more barriers just minutes later. One of them said: "We want civilian rule. We won't get tired."

Burhan on Tuesday defended the military's takeover. He said he removed the government to avoid civil war.

Burhan has dismissed the civilian-military committee that had been set up to create a process for democratic elections. The committee took over after long-ruling dictator Omar al-Bashir was overthrown in April 2019.

Workers at state oil company Sudapet on Wednesday came out against the military takeover.

"We announce (we are) joining the civil disobedience in support of the people's decision backing the civil democratic transformation and until this demand is achieved," Sudapet said in a statement. The Sudanese Professionals Association, a group of workers' unions, released the message. 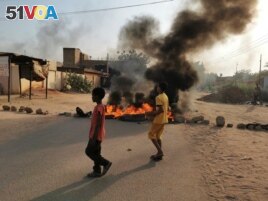 A road barricade is set on fire during what the information ministry calls a military coup in Khartoum, Sudan, October 25, 2021. REUTERS/El Tayeb Siddig

Doctors also said they would go on strike.

"As we promised and previously announced, we would enter a general strike across Sudan in the event of a coup, we are keeping to our word and timing completely," said the Unified Doctors' Office, which is made up of different doctors' unions.

The doctors' unions were an early and important group behind the 2019 uprising that brought down Bashir. Other striking groups, including oil and central bank workers, could bring the country's economy to a halt.

Civilian groups have accused the military of planning for weeks to take power.

Burhan spoke Tuesday to reporters for the first time since the takeover. He said the military had no choice but to remove the government because politicians were turning people against the military. He also said the military's action was not a coup.

Events in Sudan are similar to several other Arab countries where the military tightened its control following uprisings. Sudan is Africa's third largest country.

Willow Berridge is a Sudan expert at Newcastle University in Britain. She said it would be difficult for Burhan and the army to stop street protests. Berridge noted the high number of protest committees in many areas of Khartoum.

"My greatest fear is that he will fall back even further on the only legitimacy he can depend on – violence. It is a very serious risk," Berridge said.

Burhan has close ties to countries that worked to contain Islamist influence and lessen the impact of the 2011 Arab Spring uprisings, in places like the United Arab Emirates, Saudi Arabia and Egypt.

Western countries have denounced the takeover in Sudan, which has a history of military coups. But many Arab countries have only called for all groups involved to remain peaceful.

Jonas Horner is with the International Crisis Group. He said the Sudanese military misunderstands "the will on the street quite to their detriment." He added that the military is being poorly advised by other Arab nations more supportive of the coup.

The African Union has suspended Sudan's participation in all activities until the civilian-military committee is reestablished.

coup — n. a sudden attempt by a small group of people to take over the government usually through violence

uprising — n. a usually violent effort by many people to change the government or leader of a country

detriment — n. something that will cause damage or injury to something or someone