Doctors Use Virtual Reality to Prepare for Surgeries

Update Required To play the media you will need to either update your browser to a recent version or update your Flash plugin.
By Mario Ritter
10 December, 2017


Felicia Luna had a really bad headache. She said the painful pressure felt "like someone was squeezing my head really tight."

The pain became so bad that the 41-year-old woman could not lie down and rest her head on a pillow. 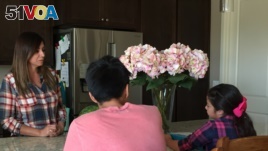 Felicia Luna, more relaxed after viewing her aneurysm through virtual reality, talks to her children on the day before her brain surgery.

Her main doctor and a specialist told Luna that she needed to stop worrying.

Then, she went to the Stanford Medical Center in California.

There, she was told doctors needed to operate on an aneurysm in her brain. And they needed to act quickly.

Doctor Gary Steinberg said the aneurysm was in danger of breaking. The operation he proposed would be very complex. Luna worried a lot about the treatment. She also wanted to know more about it.

So Steinberg decided to use virtual reality technology to improve and explain the surgical operation.

A three dimensional roadmap of the brain

To do this, medical experts needed to take three dimensional (3D) images of Luna's brain. A dye, or colored fluid, was injected into her bloodstream. Doctors then used computerized tomography (CT) technology to make detailed pictures of her brain and blood vessels.

Malie Collins is program coordinator of the Stanford Neurological Simulation and Virtual Reality Center. She creates the images Steinberg uses when preparing for surgery.

Collins once worked for an Ohio company called Surgical Theater. It makes software programs with the ability to turn medical images into 3D tools for surgeons. Doctors can see the images using headsets like Oculus Rift or similar devices.

Collins trained Stanford's medical workers to use the equipment. Then she joined the team.

Part of Collin's job is to create a "fly through" virtual reality video for patients. It lets them see inside their own bodies. This virtual reality trip lets doctors and students see what is wrong and how to treat it.

For Felicia Luna, that means she can put on a headset and travel through her own brain.

Before the operation, Luna admitted that she was "a nervous wreck." But with the video, she was able to see the path Steinberg would take to repair her blood vessel.

"Now I feel like I know exactly what's going to happen."

A new way to plan and teach complex surgery

Steinberg teaches a class at Stanford's medical school. Before the operation, he invited the class to a room with video monitors, reclining chairs and virtual reality headsets. The students used controls around their hands to move images of areas that the upcoming surgery would treat.

Collins put images of Luna's brain and blood vessels into the software so Steinberg could show the students how he would operate.

By simply moving his hands in the air, Steinberg could move the images around, showing all the areas inside Luna's head and brain.

"So we can see the back of the aneurysm, the side, we can see its relationship to the parent vessel. This is something we couldn't ever do before."

The same images were available during surgery to help doctors and medical assistants. 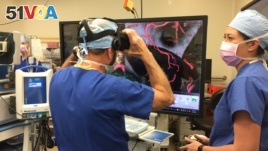 Stanford Director of Neurosurgery Dr. Gary Steinberg joins Malie Collins for a final refresher of the location of the aneurysm before Steinberg begins the surgery. Collins is the program manager of the Stanford Neurological Simulation & Virtual Reality Center.

Steinberg was even able to "practice" just before the five-hour-long operation.

Collins said the virtual reality tool makes the experience better for the patient, helps the doctor and assists in education. That is what "makes it unique and powerful," she said.

In the future, Steinberg said he may be able to perform operations at a distance from the patient with the help of robotic arms. Virtual reality software can help make that possibility more likely. But, the delay between the doctor's commands and the robot's movement make that difficult now.

Steinberg said he experienced something unexpected during the surgery that he had not planned on using the virtual tool. He saw that he needed to use two clips instead of one to control the aneurysm.

Luna left the hospital two days after the operation to be with her four children and her husband.

squeeze – v. to put pressure on opposite sides of something

aneurysm – n. when the wall of a blood vessel expands, forming a balloon which can burst

three-dimensional – adj. giving the appearance of an object's height, width and length

blood vessels – n. tissue that carry blood throughout the body

monitor – n. screens that show images, such as a computer monitor

practice – v. to perform something repeatedly so as to become skilled

clips – n. devices that press to things together