Update Required To play the media you will need to either update your browser to a recent version or update your Flash plugin.
By Phil Dierking
19 May, 2017


A documentary about Ashin Wirathu appears at the prestigious Cannes Film Festival this week. But some in Myanmar question whether the media attention has helped his rise to fame.

Wirathu is known for his anti-Muslim views. The film "The Venerable W", made by Barbet Schroeder, appears in a special screening at the festival. The festival will run from May 17 to the 28.

In 2003, Wirathu was sentenced to prison for 25 years for inciting violence. He was released in 2012. This was the same year that Myanmar experienced the first of several violent riots in its transition to democracy.

When TIME magazine featured Wirathu on the cover in 2013, the world began to understand Wirathu's connection to the problems. 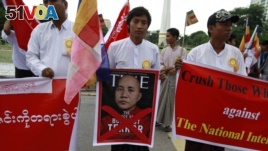 Over time, Wirathu's fame grew, as he was interviewed by many journalists. He also has a strong following on social media, with his inflammatory posts.

However, the fact that he has not faced strong resistance in Myanmar leaves some to question if he has political connections.

Thiha Saw is the director of the Myanmar Journalism Institute. He credits Wirathu's rise to the growing access to internet. He adds that the mainstream media in Myanmar is now careful about how much exposure they give him.

Thitsa Hla Htway is the secretary of the Foreign Correspondents' Club of Myanmar. He says Wirathu "has been famous because of the interviews and because of the posts in the local media."

Htway asks journalists to not report the offensive things that Wirathu has said, and focus on more diverse issues.

"What I want to stress is that they should just stay away from him and his popularity will go down. There are many important issues in Myanmar which are more important than him."

In support of military rule

Wirathu has had mixed success with his political influence. He supported the military-backed ruling party in a 2015 election against Aung San Suu Kyi's National League for Democracy.

This past March, Wirathu was banned from giving sermons for one year. But he was still allowed to travel to a part of northern Rakhine State. This is unusual because northern Rakhine has been largely closed to outsiders since Rohingya militants attacked border posts in October, killing nine [people].

According to British journalist Oliver Slow of the weekly magazine Frontier Myanmar, there needs to be a mix of scrutiny and restraint in the reporting of Wirathu.

"I think obviously he needs to be heavily scrutinized. His group and the people behind him have the potential to cause massive issues, so I think it's important to be reporting on him and what they are doing," Slow says.

"But I think we pretty much know all his views now, they've been aired for the past four or five years. His views on Muslims, his views on religion, have been so well aired, I just don't really see any benefit any more of interviewing him."

Matthew Smith is the executive director of the [non-governmental organization] NGO Fortify Rights. He wants more investigative coverage of Wirathu.

Since most foreign readers regard Buddhism as a religion of peace, Smith feels editors chose to report stories about an extremist monk who preaches hatred.

­­­­­­­­­­­­This story was originally written by Joe Freeman for VOA News. Phil Dierking adapted it for VOA Learning English. Hai Do was the editor.

Should the media give less coverage of controversial people? We want to hear from you. Write to us in the Comments Section or on 51VOA.COM.

prestigious - adj. the respect and admiration that someone or something gets for being successful or important

extremist - n. someone who has extreme ideas about politics, religion, etc.

scrutiny - n. the act of carefully examining something especially in a critical way