Does Higher Education Help Some Groups More than Others?

Update Required To play the media you will need to either update your browser to a recent version or update your Flash plugin.
By Pete Musto
29 February 2020

A recent study suggests that higher education in the United States helps white people more financially than it does other groups.

The finding makes some education experts question the effectiveness of U.S. efforts to fight racial injustice. At the same time, other experts note that systemic inequality and racial discrimination are not limited to the United States.

Last October, the Georgetown University Center on Education and the Workforce published a study on U.S. college graduates. Researchers looked at the earnings of white, black and Latino Americans who had earned a bachelor's degree between 1991 and 2016.

Over that period, blacks and Latinos with a bachelor's degree increased their likelihood of getting and keeping a good-paying job. The Georgetown researchers defined such a position as one paying at least $35,000 a year. But in 2016, white college graduates held 77 percent of the good-paying jobs. These men and women represented 69 percent of available job holders nationwide.

The study also showed that whites holding a bachelor's degree and working in a good job earned about $10,000 more a year than blacks and Latinos with the same education.

Anthony Carnavale is the director of the Georgetown center. He describes the findings as just another example of America's long history of treating minorities unequally. 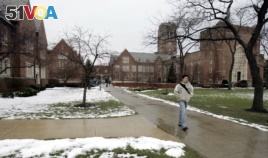 Andy Matusek, 20, a sophmore marketing and logistics major at John Carroll University, walks to classes at the school Thursday, March 2, 2006, in Cleveland. The Jesuit-run school looked to increase its racial diversity and national profile.

The first blacks to arrive in North America came as slaves. Even after the United States banned slavery, many southern states created Jim Crow laws. These rules barred African Americans from many schools and fields of employment. Carnavale told VOA that conditions for black Americans improved somewhat over the years. But following World War II, many Whites moved out of major U.S. cities thanks, in part, to the financial aid they received for their military service.

Carnavale added that Latinos did not become a major part of the U.S. economy until the late 1980s. He said they faced much the same discrimination as blacks. In more recent times, there have been efforts to reduce barriers to higher education, especially for minorities. For the most part, however, this has meant sending black, Latino and poor students to two and four-year public colleges and universities.

State governments give far less financial support to these schools than they used to, noted Carnavale. This means many of the schools struggle to support students as best they can.

"So we've created more access to higher education in America, but we have not created much more success," he said. "The success, the graduation rates are highest, by far, for affluent white kids."

Victor Goode argues that the inequality issue goes beyond education and extends into many other areas of American life. Goode is the education director for the National Association for the Advancement of Colored People, or NAACP, a U.S.-based civil rights group.

To date, the U.S. government continues to face problems in dealing with inequality in many areas, says Goode. In 2019, the U.S. Commis

Goode adds that a little over 65 years ago, the U.S. Supreme Court ruled states could not prevent Black students from attending the same schools as whites. But this year, a New Jersey judge agreed to consider a court case against the state's public school system. The NAACP and other groups have accused the state of segregation based on race and earnings.

The NAACP is has also taken legal action to demand greater financial support for public schools from state governments in Maryland, Delaware and Minnesota.

"States...need to see how they can do a better job of providing an adequate, equitable education to all students," noted Goode.

While every country is different, this kind of inequality exists in many majority-white nations, says Kyriaki Topidi. She is a researcher with the European Centre for Minority Issues.

Topidi notes that, in Germany, many recent African and Middle Eastern immigrants lack access to high schools with advanced study programs. And studies showed that employers in Britain were 60 percent more likely to consider White candidates for employment than Blacks or South Asians.

Topidi suggests one way to deal with this is by working with local governments to create anti-discrimination policies. Also, she said, leaders should try to get members of different races and economic levels to understand each other better through community-building events and training.

"This process should be based on the acceptance that people do not simply represent ‘ethnicities' or ‘races,' but rather are complex beings that also differ according to social status, interests, profession, beliefs," she said.

Yet Anthony Carnavale is not hopeful that conditions for blacks and Latinos will improve in the United States any time soon. He says that unless wealthy White Americans are willing to spend much more in taxes to support public education, things will likely remain the same for the next 30 years.

Pete Musto reported this story for VOA Learning English. George Grow was the editor. Write to us in the Comments Section or on 51VOA.COM.

affluent – adj. having a large amount of money and owning many expensive things

segregation – n. the practice or policy of keeping people of different races or religions separate from each other

adequate – adj. of a quality that is good or acceptable

equitable – adj. dealing fairly and equally with everyone

advanced – adj. beyond the basic level

according to – prep. as stated, reported, or recorded by someone or something

status – n. the position or rank of someone or something when compared to others in a society, organization or group