Update Required To play the media you will need to either update your browser to a recent version or update your Flash plugin.
By Anna Matteo
26 August, 2018


Many dogs are very hard-working animals.

They have been helping people for thousands of years. Dogs protect our homes. They help people with disabilities. They team up with rescue workers in search-and-rescue operations. 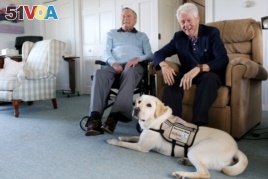 And now, dogs can add another job to their resumes -- finding endangered animals! The official title for this kind of work is conservation detection dog.

Conservation experts in Australia are training dogs to use their sense of smell. The aim of the job is to find some of the country's most endangered creatures.

Luke Edwards is a dog owner and trainer. He is training two border collies, named Rubble and Uda, to become conservation detection dogs.

He says that border collies are good for this kind of work because they have a great sense of smell. The dogs also have great stamina -- the mental and physical strength to work long hours.

"We know that border collies are really good at both searching and their stamina. That's what we're after for a working dog is their stamina -- both mentally and physically."

The work is difficult mainly because of the search area. Just to get to the place, or site, where the frogs live, the dogs and their trainers must walk far distances through alpine forests.

"Going out to the sites at Mount Baw Baw is probably one of the hardest areas I've had to search in. Just to get out to the site, we're trekking through alpine forest."

It is difficult but important work.

A deadly fungus has killed nearly all of Australia's Baw Baw frogs. In fact, scientists say these creatures could disappear in the next five to 10 years.

Zoos Victoria is a group set up to protect wildlife. Conservation experts there claim that since 1980 the deadly fungus has killed off 98 percent of the Baw Baw frogs.

So, Zoos Victoria is trying to save the frog. Experts there raise them and have them reproduce. They call it their captive breeding program.

Deon Gilbert is a frog expert at Zoos Victoria. He says that detecting the frogs in the wild can be very difficult because they mainly live underground. The females are even more difficult to find. They, unlike the male Baw Baw frogs, do not have a call. He adds that the dogs Rubble and Uda had no trouble in finding the frogs.

"This species is incredibly difficult to detect in the wild. The dogs were able to locate the exact site where the frogs were calling from much, much quicker than we could do just by using ears."

Dogs may find other endangered animals

Zoos Victoria in Australia is now considering using trained dogs to find other endangered species. Chris Harnett is also with the organization. She says finding endangered animals may be the perfect job for dogs – what she calls their "niche."

"Particularly for those cryptic and low-density species, we think detection dogs might have a really important role to play. In fact, that could be their niche."

Luckily, other dogs are also being trained to find endangered species.

Tracy Edwards is another dog trainer. She owns a young border collie named Oakley. She says he is just learning how to obey commands and recalling what he smells.

"He's only a puppy -- or what we call now a 'wuppy', a whopping big puppy! And he is just kind of living life at the moment -- learning the basics, so obedience and recalls."

Tracy says that Oakley will start working as a conservation detection dog later this year. She agrees that border collies make good detection dogs because they work hard. But she points out another quality not mentioned by the other researchers: They are also very loving.

résumé – n. a short document describing your education, work history, etc., that you give an employer when you are applying for a job

trek – v. to go on a long and often difficult journey : to walk usually for a long distance

fungus – n. any one of a group of living things (such as molds, mushrooms, or yeasts) that often look like plants but have no flowers and that live on dead or decaying things

captive breeding – science term : the process of breeding animals in controlled environments within well-defined settings, such as wildlife reserves, zoos and other commercial and noncommercial conservation facilities

niche – n. a job, activity, etc., that is very suitable for someone

cryptic – science term : animals that blend into their environment to avoid observation : a group of species that are very difficult to distinguish from one another

cuddle – v. to hold close for warmth or comfort or in affection : cuddle up – phrasal verb