Update Required To play the media you will need to either update your browser to a recent version or update your Flash plugin.
By Pete Musto
01 November, 2015


A new law makes it legal to have dogs in the outdoor areas of restaurants in New York.

Past health and safety laws made it illegal to bring dogs to any restaurants in New York. This was to prevent the spread of diseases.

State lawmakers voted in May to let people bring dogs to restaurants that have tables outdoors. These areas are often called patios. 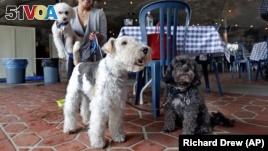 Not one lawmaker voted no.

In many European countries, bringing dogs to restaurants is common. Paris has allowed dogs to accompany their owners in restaurants for a long time.

Several special rules are included in this law. The dogs must be on a leash. Dogs must not share water bowls. Also, restaurants can choose to let people bring dogs or not.

But, not all New Yorkers are happy about this new law. Christopher Miller is the spokesman for the New York City Department of Health. He told the New York Daily News that letting dogs in restaurants could cause problems.

"The Health Department loves all dogs, but just not at restaurants where they can create a risk to the health and safety of diners, restaurant workers and other dogs," Miller said.

New York City is often the source of new trends and attitudes in the US. A law forcing some restaurants in the city to show the amount of calories in the food they served passed in 2009.

Former Mayor Michael Bloomberg tried unsuccessfully to stop the sale of large amounts of soft drinks in 2012. Cigarette smoking was made illegal in restaurants in 1993.

Governor Cuomo believes that this new law will help businesses grow by attracting dog owners. He also said this law "strikes the right balance" between health laws and flexibility for businesses.

Pete Musto reported and wrote this story for VOA Learning English. Kathleen Struck was the editor.

Are dogs allowed in restaurants in your country? Do you people think dogs are unhealthy or unclean? Let us know in the Comments section below or on our 51VOA.COM.

outdoor – adj. done, used, or located outside a building

leash – n. a long, thin piece of rope or chain is used for holding a dog or other animal

spokesman – n. someone who speaks for or represents a person, company or organization

diner(s) – n. a person who is eating dinner in a restaurant

trend(s) – n. a way of behaving or proceeding that is developing and becoming more common

calorie(s) – n. a unit of heat used to show the amount of energy that foods will produce in the human body

soft drink(s) – n. a cold drink that is usually sweet, does not contain alcohol, and is often sold in bottles or cans

flexibility – n. the ability to change or try different things