Don't Let Anyone 'Get Your Goat'

Update Required To play the media you will need to either update your browser to a recent version or update your Flash plugin.
By Anna Matteo
07 July, 2018


Now, Words and Their Stories, a program from VOA Learning English.

On this program, we take English expressions and explain where they came from and how to use them.

In all languages, animals often find themselves in the center of many common expressions. English is no different. Today we focus on the goat!

People have been dealing with goats for a long time. A website on the history of goats, The Goat Guide, says their story dates back many centuries. It claims that people began using the animals as food over 9,000 years ago!

Goats are nosy, social animals. They are strong and can live in any number of environments. They can eat almost anything and a lot of it!

Among all domesticated animals, goats probably have the most going for them. Milk from goats never costs a lot. And goat milk is easy for the body to digest. Their meat is tasty and can be prepared in different ways. In addition, goat hair is used to make some of the finest and softest clothing money can buy.

With such a long history and so much going for goats, you would think that English has many expressions with the word goat. 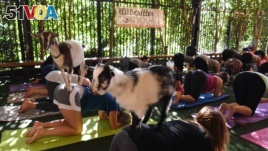 This is a picture of goat yoga. Yes. Goat yoga. These yoga students are take a class with Nigerian Dwarf goats in Los Angeles, California, May 2018.

We only found two. And one is just a noun: the word goatee.

Now, goats have small, tufts of hair on the lower part of the face. So a goatee is facial hair in about the same part of the chin on a man. It looks a little like the beard on a male goat.

The Merriam-Webster Dictionary claims that the word goatee first appeared in 1841. At that time, a goatee only meant hair growing on a man's chin, much like a goat's. However, by the 1990s, the word had come to mean any facial hair that is on the chin but not higher up on the cheeks. So it also involved men wearing a mustache. Some would argue -- and people who study men's facial hair do -- that a true goatee is only hair on the chin.

The next goat-related expression is more interesting -- to get someone's goat.

Hearing this expression the first time, you might think it means to steal someone's goat. But that is wrong.

If someone gets your goat, they make you angry.

That's a good question. The answer is ... we're not so sure.

A Dictionary of Slang and Unconventional English says that "to get someone's goat" may come from the French expression prendre la chevre, which means to take the goat.

Apparently, one way people could get milk was from a goat. So naturally, taking the animal would anger its owner.

Another explanation has to do with horseracing.

In the 1900s, people who trained horses were said to have put goats near racehorses to keep them calm. Just before the race, the goat was removed. This would, supposedly, make the horse nervous and ready to run.

However, there is no evidence to support this explanation. People who study languages for a living have a name for it -- folk etymology. Another term for it is an urban legend.

In earlier times, "to get your goat" had another meaning. If something got your goat, it could have made you nervous or worried.

In his book Smoke Bellow, American writer Jack London tells the story of two men crossing a bridge that is very high off the ground. The lead character, Smoke, makes it safely across and shouts a warning back to the other.

"Your turn," he called across. "But just keep a-coming and don't look down. That's what got my goat. Just keep a-coming, that's all. And get a move on. It's almighty rotten."

Here, he means looking down made him feel frightened. Americans don't really use the expression in this way any longer. It is a good example of how the meaning of an expression can change over time.

Let's talk about some other words that mean the same as "got someone's goat."

We have already used the word "annoy." Some similar words are aggravate, bother and bug. You can also irk and vex someone. So, something that gets your goat is irksome or vexing. And if someone has gotten your goat, you could also say he or she has rubbed you the wrong way.

Let's say you work with someone who doesn't clean up after herself. You can say, she really gets your goat. Or if you want to make it less personal, you can say, "It really gets my goat when she makes a mess at the coffee machine."

Now, if something often gets your goat or rubs you the wrong way, it can become a pet peeve. Pet peeves are those seemingly small things that get on your nerves.

While a person can get your goat or get on your nerves, he or she cannot be called a "pet peeve." But their actions can!

For example, one pet peeve of mine is when one person takes up two seats on a crowded train, especially if a pregnant woman or older adult needs a seat! Is it a big deal? No. But it gets my goat, nonetheless.

So, what gets your goat? What rubs you the wrong way? Do you have any pet peeves? Let us know in the Comments Section!

I looked for sniffy linings
But you're rotten to the core
I've had just about all I can take
You know I can't take it no more ..."

Anna Matteo wrote this story with some literary references from a 1992 story written by Deborah Potter. George Grow was the editor. The song at the end is Devo singing "Gut Feeling.

domesticate – v. to breed or train (an animal) to need and accept the care of human beings : to tame (an animal)

digest – v. to change (food that you have eaten) by a biological process into simpler forms that can be used by the body

tuft a small bunch of feathers, hairs, grass, etc., that grow close together : tufts of grass : A tuft of hair stuck out from under his hat.

folk etymology – n. the transformation of words so as to give them an apparent relationship to other better-known or better-understood words

urban legend – n. a story about an unusual event or occurrence that many people believe is true but that is not true

character – n. one of the persons of a drama or novel

aggravate – v. informal : to make (someone) angry : to annoy or bother (someone)