Update Required To play the media you will need to either update your browser to a recent version or update your Flash plugin.
By Anna Matteo
02 May 2020

The last Friday in April is National Arbor Day in the United States. Arbor Day celebrates the role of trees in the world around us. Each year, organizers call on Americans to plant trees and care for them.

In 1872, a Nebraska man named J. Sterling Morton proposed the first Arbor Day. It became a legal holiday in the state 13 years later.

Today many states observe Arbor Day on different dates throughout the year based on best planting times in their area. In North Dakota and Vermont, for example, Arbor Day is celebrated on the first Friday in May. 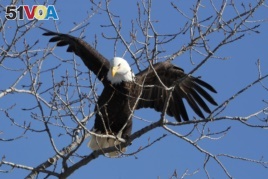 A bald eagle lands in a tree in in Des Moines, Iowa, February 6, 2020. (AP Photo/Charlie Neibergall)

A non-profit group called the Arbor Day Foundation operates the ArborDay.org website. It notes that "tree planting festivals are as old as civilization. The tree has appeared throughout history and literature as the symbol of life."

Trees do a lot for the environment. They clean the air around us. Some trees, such as apple and pear, give us fruit. Trees also provide shade for us and other creatures.

Some animals build their homes inside trees or on strong tree branches. People and animals can use the wood from trees for building materials.

You might find this strange, but trees can be fun to watch. You can just sit back and watch birds high up in the trees. If you live in an area with squirrels, watching them run up and around trees, jumping from one to the next can be a lot of fun.

And that brings us to our expression for today: to bark up the wrong tree.

In fact, this expression is more like an idiom.

Now, you might think that "bark" in "to bark up the wrong tree" means the strong, outer covering of a tree. But that is not the right "bark."

In our expression today, "bark" means the sound a dog makes.

Now, imagine that a dog chases a squirrel up a tree. That is a lot of work – for the dog, that is. Dogs cannot climb trees. Squirrels, on the other hand, are expert climbers -- of trees and just about anything else. A squirrel may go up one tree but then jump to another. The dog simply can't follow the squirrel. So, it stays on the ground barking and barking up the wrong tree.

And that is where we get our idiom.

When a dog barks up a wrong tree, they are barking up a tree that no longer has their prey – the squirrel.

For people, barking up the wrong tree means following a mistaken plan of action. If I bark up the wrong tree, I am doing something that will not get the result I want. I am wrong about the reason for something or possibly the way to get something.

For example, at a party I notice that my co-worker Jonas is interested in a good friend of mine named Ursula. But Ursula is happily married, which is bad news for Jonas. So, I say to him, "Jonas, I know you want to ask Ursula out on a date. But you are barking up the wrong tree! She is very happily married."

Now, let me tell you about another person who used the wrong way to get something.

A friend of mine, Sharon, needed money for her new business idea. So, she went to an event to meet possible investors. However, the only people she met were other people looking for money. She spent the whole time barking up the wrong tree!

So, if you came to the VOA Learning English website to learn English, I would not say you are barking up the right tree. I would just say, "Welcome! You've come to the right place!"

Join us again next week when we explore words and expressions in American English.

festival – n. a time of celebration marked by special observances

prey – n. an animal that is hunted or killed by another animal for food