‘Rocket Man’ Vs. ‘Dotard’ in War of Words

Update Required To play the media you will need to either update your browser to a recent version or update your Flash plugin.
By Bryan Lynn
22 September, 2017

The two leaders have been exchanging unusually personal insults as international pressure on North Korea grows.

The latest examples came on Friday, when Kim called Trump a "mentally deranged U.S. dotard." Dotard is not used very much in American English. So it quickly became a top search word on Google Trends, and a much-discussed term on social media.

America's Merriam Webster dictionary describes dotard as "a person in his or her dotage." Britain's Oxford defines the word as "an old person, especially one who has become weak or senile."

Kim's insult came in response to statements made by Trump earlier this week during his speech to the United Nations General Assembly. In the speech, Trump called the North Korean leader - who often attends missile tests – "rocket man." He also said Kim's actions show that he appears to be on a "suicide mission."

Trump also used his strongest words yet for Kim's government, warning that if the U.S. ever felt threatened, it would "have no choice but to totally destroy North Korea."

The United States and many other nations have criticized North Korea for continuing to develop nuclear weapons and carrying out repeated missile tests. The U.N. has placed sanctions on North Korea in an effort to get it to give up its nuclear weapons program.

In a statement carried by North Korean state media, Kim also said Trump would "pay dearly" for his recent threat to destroy the country. A photo and video was released of Kim reading the statement. He called Trump "a rogue and a gangster" who likes "playing with fire."

Kim said Trump's comments had "insulted me and my country in front of the eyes of the world." He added the U.S. president had "made the most ferocious declaration" of war in history.

In response, Kim said his country would "consider with seriousness" carrying out the "highest level of hard-line countermeasure in history." 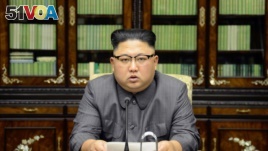 North Korea's foreign minister was asked in New York during a visit for the U.N. General Assembly what this countermeasure could be. The minister, Ri Yong Ho, told South Korean TV the country might test a hydrogen bomb in the Pacific Ocean.

"I think it could be the most powerful detonation of an H-bomb in the Pacific," the minister was quoted as saying. He then added, "We have no idea about what actions could be taken as it will be ordered by leader Kim Jong Un."

Trump took to Twitter to respond to Kim's latest statements. "Kim Jong Un of North Korea, who is obviously a madman who doesn't mind starving or killing his people, will be tested like never before!" he tweeted on Friday.

Trump's tweet came a day after he signed an executive order permitting the U.S. to sanction individual companies and institutions that do business with North Korea. He said the action was needed to stop those who "financially support this criminal, rogue regime."

Some experts believe the strong words between Trump and Kim may be purposeful attempts to seek a better position during future negotiations, if they are held.

Bong Young-shik is with Yonsei University's Institute for North Korean Studies in Seoul. He says the war of words could mean that both sides are now trying to get the other to back down to make way for possible diplomatic efforts to end the conflict.

deranged – adj. not able to think or act in a normal or logical way, especially when suffering from mental illness

senile – adj. confused and unable to remember things due to old age

sanction – n. action taken to make a country obey a rule or law

rogue – adj. used to describe something or someone that is different from others, usually in a dangerous or harmful way

gangster – n. member of a group of violent criminals

hard-line – adj. strict and forceful way of behaving when dealing with other people