Update Required To play the media you will need to either update your browser to a recent version or update your Flash plugin.
By Bryan Lynn
07 July, 2017

U.S. Secretary of State Rex Tillerson said Friday's meeting began with Trump pressing Putin on the issue. Tillerson spoke to reporters after the meeting in Hamburg, Germany, where Trump and Putin are attending the G-20 summit.

He said Putin denied any involvement in efforts to influence the presidential election. The Russian side also asked the U.S. to provide evidence of any alleged interference, according to Tillerson.

Russian Foreign Minister Sergey Lavrov gave his own description of the talks on election interference. Speaking to reporters after the meeting, he said Trump had accepted Putin's denial that Moscow was not involved. 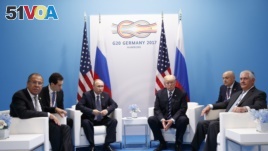 Putin has repeatedly denied the Russian government took steps to interfere in the election. During an interview last month, he did say it was possible that Russian "patriots" with no ties to the government might have been involved.

A U.S. intelligence community report concluded in January that Putin had ordered an influence campaign to target the U.S. election. The report said Russia - through hacks and other measures - sought to harm candidate Hillary Clinton's chances of winning against Trump.

The FBI and several congressional committees are currently investigating the issue. The investigations are exploring whether Trump, or any of his team, may have worked with Russian intelligence officials during the presidential campaign.

Trump has denied any contacts between his campaign and Russian officials and dismissed the claims as "fake news."

Tillerson said Trump was now "rightly focused on how do we move forward from what may be simply an intractable disagreement at this point."

The talks were expected to go 30 minutes, but ended up lasting more than two hours. Tillerson also described the meeting as "very constructive" and said the two leaders "connected very quickly."

In the past, the United States and Russia have held conflicting views on Syria. But Tillerson said Russia now has an interest in seeing a stable peace in the war-torn nation. The Jordanian government was also involved in the cease-fire agreement.

Trump also met face-to-face for the first time in Hamburg with Mexican President Enrique Pena Nieto. "It's great to be with my friend the president of Mexico," he told reporters before the meeting. 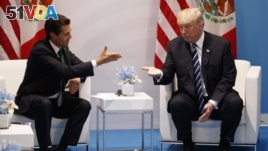 A planned meeting between the two presidents was canceled in January after a Twitter dispute over Trump's proposal to build a wall on the southern U.S. border to keep out illegal immigrants.

Trump repeated Friday a demand made many times before that Mexico should pay for the wall. When asked to comment on the issue, Trump said he "absolutely" still wants Mexico to pay for the wall.

alleged – adj. said to have happened, but not yet proven

patriot – n. person who loves and strongly supports his or her country