Trump: Comments About Judge Were 'Misconstrued'

Update Required To play the media you will need to either update your browser to a recent version or update your Flash plugin.
By Bryan Lynn
07 June, 2016


Republican presidential candidate Donald Trump said his comment about a federal judge was "misconstrued" as an attack against people of Mexican heritage.

The presumptive Republican nominee issued a statement after criticism from both Republicans and Democrats. He added that, "while this lawsuit should have been dismissed, it is now scheduled for trial in November. I do not intend to comment on this matter any further."

People who paid money to take real estate courses at Trump University are suing Trump for fraud. They claim they did not receive the education they paid for and have demanded their money back.

The billionaire real estate developer denies the fraud allegations. He says many Trump University customers were happy with the classes they paid for and gave the program positive reviews.

Trump says Curiel has a "conflict of interest" in the case because the judge's parents were born in Mexico. The candidate has called Curiel "a Mexican," even though he was born and raised in the Midwestern U.S. state of Indiana.

Trump has explained that Curiel is biased against him because of his proposal to build a wall along the Mexico-U.S. border to stop illegal immigration. He has also said that if elected, he would begin to deport millions of illegal immigrants.

Trump has called on Curiel to withdraw from the case so that another judge can take over.

"I regret those comments he made. Claiming a person can't do the job because of their race is sort of like a textbook definition of a racist comment. 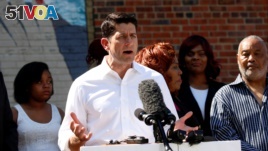 Speaker of the House Paul Ryan talks to reporters during an event to discuss the Republican Party's anti-poverty plan in Washington, D.C., June 7, 2016.

Republican Senator Ben Sasse, from Nebraska, tweeted his opposition to Trump's views. "Saying someone can't do a specific job because of his or her race is the literal definition of 'racism,'" Sasse said.

Senate Majority Leader Mitch McConnell said Sunday on NBC's Meet the Press he "could not disagree more" with what Trump said.

"This is a man who was born in Indiana. All of us came here from somewhere else. Almost all Americans are either near-term immigrants like my wife - who came here at age 8 not speaking a word of English - or the rest of us, whose ancestors were risk-takers, who got up from wherever they were and came here and made this country great."

Kasich tweeted that Trump was "flat out wrong" and urged him to "apologize to Judge Curiel & try to unite this country."

Rubio agreed. "There shouldn't be any sort of ethnicity, religious or racial tests for what kind of judges should hear what kinds of cases," he said. "It's wrong and I hope he (Trump) stops."

On the Democratic side, Congressman Filemon Vela wrote an open letter criticizing Trump's "ignorant anti-immigrant opinions." He said the candidate's statements on a border wall and his attacks on Curiel "are just plain despicable."

Vela added: "Mr. Trump you are a racist and you can take your border wall and shove it...."

Trump stepped up his verbal attacks on Curiel after the judge ordered the release of sealed documents relating to the Trump University case.

Trump was asked if he would also reject a Muslim judge because of his proposal to ban Muslims from entering the United States. "Yeah. That would be possible, absolutely," he said.

Smita Nordwall reported on this story for VOANews. Bryan Lynn adapted it for Learning English. Hai Do was the editor.

What do you think about Donald Trump's comments about Judge Curiel? Write to us in the Comments section, and visit 51VOA.COM.

sue – v. take someone to court to resolve a legal dispute

fraud – n. a crime using dishonest methods to take money or valuables from others

conflict of interest – n. when a person is in a position to gain personal benefit from an official job or position

biased – adj. having or showing bias or prejudice

ancestors – n. members of a person's family from past times