Update Required To play the media you will need to either update your browser to a recent version or update your Flash plugin.
By Pete Musto
26 November, 2016


Hussain Saeed Alnahdi was one of the almost 400 international students attending the University of Wisconsin-Stout.

Twenty-four-year-old Alnahdi was from Saudi Arabia. He began his studies at the school in the Midwestern part of the United States last year. But early on the morning of October 30, Alnahdi's experience as an international student came to a violent end. An unnamed attacker beat him until he died outside a restaurant in the city of Menomonie.

A few weeks later, police announced they had arrested a suspect. They said they do not believe the attack was a hate crime, or a crime influenced by race. 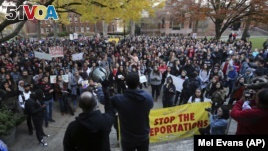 A large crowd gathers during a protest over some of President elect Donald Trump policies and to ask school officials to reject some of his plans at Rutgers University.

But events like the attack in Wisconsin have raised concerns for many international students living and studying in the U.S.

Study in the U.S.A. is a company that supports international students who want to study at American colleges and universities. A few days before the U.S. presidential election, the company released the results of an opinion study of 1,000 international students from 130 countries. Over 65 percent of the students said they would be less likely to study in the U.S. if Donald Trump were elected president.

FPP EDU Media also works with international students. The company released its own survey of 40,000 students in June. Those results suggested 60 percent of their students felt the same way.

During his campaign, President-elect Trump made statements about Mexican people that many critics called racist. At one point, he called for a ban on all Muslims entering the U.S.

The Southern Poverty Law Center is a civil rights group based in Montgomery, Alabama. The group says it has received 437 reports of incidents of intimidation and harassment in the six days following the election.

Renait Stephens is the chief executive officer of Study in the U.S.A. She says international students and their parents are worried. However, she is also hopeful. She argues that what a politician says during a campaign and what they do once they are in power are two different things.

Stephens says international students will have to wait and see what happens.

"It's early days. And until we know something more about any policy changes, then I think we just have to really emphasize that and hope that our education system will continue to be how it is right now. So right now we're just trying to reassure students that nothing has changed. U.S. campuses are still safe. They're still open. They're still diverse. And you still get a fantastic education."

Other experts say there has never been any real threat to international education. The Institute of International Education (IIE) is a nonprofit organization that studies and supports international student exchanges.

Peggy Blumenthal is an official with the IIE. She says the organization has been recording international student numbers for over 90 years.

She says international students are mostly concerned with the quality of the education they can get in the U.S. The rest of the world still values the strength of the American higher education system above almost any other country, she adds.

Blumenthal points to historical examples. When the U.S. accidentally bombed the Chinese embassy in the capital of Serbia in 1999, major protests took place at the U.S. embassy in Beijing. But, she says, shortly after the protests, Chinese students were complaining the American embassy was not processing their visas fast enough.

Foreign students bring a lot to the economies of many towns and cities across the U.S. The U.S. Department of Commerce says international students added about $30 billion to the U.S. economy in 2015. Blumenthal argues that no politician is willing to risk losing that.

However, Philip Altbach remains worried. Altbach is the director of the Center for International Higher Education. The center works through Boston College to research and support international study.

Altbach says there are examples of decreases in international study in other countries. He notes the major decrease of Indian students studying in Australia after several Indians were attacked there in 2009 and 2010. He also says the language Trump and his supporters used during the campaign has lowered the world's opinion of the U.S.

"I think that the toxic discourse of the campaign and of what Mr. Trump has said for a long time actually is extraordinarily damaging for the image of the United States in general and in the thinking of students and faculty members overseas who may be considering studying in the United States or coming here as professors. Because the choice of where to study in the world depends very significantly on the comfort that students and their families will feel about the country to which they are planning to go."

Altbach says international students and professors bring different perspectives to the universities where they study or teach. Losing them would cost the American students a lot -- educationally and financially.

Altbach admits there is no way to know what will happen until the new administration takes office. But until then, universities must make clear public statements saying they will support and protect international students. If not, Altbach says, America may no longer be the first choice for people seeking the best education in the world.

Pete Musto reported on this story for VOA Learning English. Mario Ritter was the editor.

We want to hear from you. How would Donald Trump being president affect your decision to study in America? Write to us in the Comments Section or on 51VOA.COM.

hate crime – n. a crime influenced by an unfair feeling of dislike for a person or group because of race, sex or religion, typically involving violence

influence(d) – v. to affect or change someone or something in an indirect but usually important way

racist – adj. showing belief that some races of people are better than others

emphasize – v. to give special attention to something

discourse – n. the use of words to exchange thoughts and ideas

perspective(s) – n. a way of thinking about and understanding something, such as a particular issue or life in general

graduate student(s) – n. a person who is working on a degree or diploma from a school, college, or university after earning a bachelor's degree or other first degree