Don't Be Caught With Your Pants Down

Update Required To play the media you will need to either update your browser to a recent version or update your Flash plugin.
By Jill Moss
27 June, 2015

Have you ever considered all the English expressions that include words about clothes? Let's hear Faith Lapidus name a few off the cuff, or without any preparation.

People wear pants to cover the lower part of their bodies. We sometimes say that people who are restless or nervous have ants in their pants. They might also fly by the seat of their pants. They use their natural sense to do something instead of their learned knowledge. Sometimes, people may get caught with their pants down. They are found doing something they should not be doing. And, in every family, one person takes control. Sometimes a wife tells her husband what to do. Then we say she wears the pants in the family. 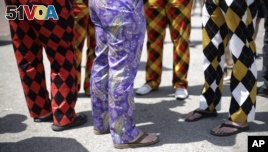 Who wears the pants in your family? These people wearing colorful pants may think they do. But maybe not. (AP PHOTO)

Pants usually have pockets to hold things. Money that is likely to be spent quickly can burn a hole in your pocket. Sometimes you need a belt to hold up your pants. If you have less money than usual, you may have to tighten your belt. You may have to live on less money and spend your money carefully. But once you have succeeded in budgeting your money, you will have that skill under your belt.

I always praise people who can save their money and not spend too much. I really take my hat off to them. Yet, when it comes to my own money, I spend it at the drop of a hat – immediately, without waiting. And sadly, you cannot pull money out of a hat. You cannot get money by inventing or imagining it.

Boots are a heavy or strong shoes. People who are too big for their boots think they are more important than they really are. I dislike such people. I really do. You can bet your boots on that. Yet, truly important people are hard to replace. Rarely can you fill their shoes or replace them with someone equally effective.

My father is an important person. He runs a big company. He wears a suit and tie and a shirt with sleeves that cover his arms. Some people who do not know him well think he is too firm and severe. They think he is a real stuffed shirt. But I know that my father wears his heart on his sleeve. He shows his feelings openly. And, he knows how to keep his shirt on. He says calm and never gets angry or too excited.

Also, my father has never lost his shirt in a business deal. He is too smart to lose all or most of his money. This is because my father rolls up his sleeves and prepares to work hard. He often has a special plan or answer to a problem that he can use if he needs it. He is like a person who does magic tricks. We say he has a card up his sleeve.

This VOA Learning English program, Words and Their Stories, was written by Jill Moss and presented by Faith Lapidus.

We leave you with this Nancy Sinatra – yes, that's right, Frank Sinatra's daughter – singing "These Boots Are Made for Walkin'."

If you find out a lover has been cheating on you, you can say to them, "these boots are made for walkin'" as you walk out the door.