Don't Get Caught in a Catch-22

Update Required To play the media you will need to either update your browser to a recent version or update your Flash plugin.
By Frank Beardsley
15 November, 2014


Now, Words and Their Stories, a VOA Learning English program about American expressions. I'm Anna Matteo with the expression, Catch-22.

Here is a situation: You want to find work. You find a job that you think you could do well. You ask for the job, but are told you cannot have it. The reason? You have not done that job before. 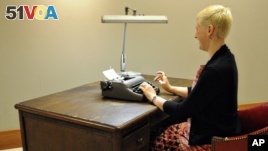 This undated photo provided by the University of South Carolina Creative Services, a woman sits at author Joseph Heller's old wooden desk and types on the battered typewriter he used to compose "Catch-22."

The expression Catch-22 comes from the name of a book written in the 1960s by Joseph Heller. Catch-22 is the story of Captain John Yossarian, an imaginary Air Force flier in Europe in the closing months of World War II.

Yossarian is angry because so many people he never met are trying to kill him. He has to fly day after day to drop bombs on the Nazis who are trying to shoot down his plane. His commander keeps raising the number of times his men must fly before they can go home.

Yossarian searches for a way to stop flying.He finds an Air Force rule that says a soldier can be removed from flight duty if he is insane. Yossarian decides any soldier is insane if he is willing to put his life in danger by continuing to make dangerous flights. 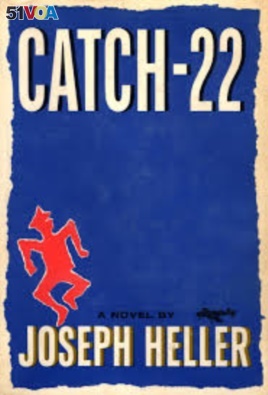 He thinks he has found a way to save his life. But he learns there is a "catch" – a tricky condition — to that rule. Anyone who requests to be removed from flight duty because he no longer is willing to put his life in danger cannot claim to be insane. He must continue to fly.

(The book Catch-22 was made into a 1970 movie. Here is the scene where Captain Yosasarian learns about Catch-22.)

That was the "catch" in Catch-22. Catch-22 is often used today to describe what seems to be a reasonable solution that will not work because of an unreasonable condition.

The book Catch-22 has many other examples of Catch-22, of course. At one point, a prostitute, a woman who has sex for money, tells Yossarian that she cannot marry him because he is crazy. She says she will never marry a crazy man. And she considers any man who would marry a woman who has already had sex ... crazy.

This is a Catch-22 because as soon as a man agrees to marry her, he becomes crazy for wanting to marry a woman who has already had sex. So, she cannot marry him. She will remain unmarried until she changes the illogical condition that keeps her in her own Catch-22.

That is what happens in a Catch-22 situation -- no way out.

Here is another simple, real-life example. You want to borrow your parent's car for the night. You ask your mother. She says, "That is fine with me. But first, you must get permission from your father."

But when you ask your father, he says, "It is fine with me. But you must first get permission from your mother."

In other words, you are caught in a classic Catch-22, a trap used by some parents.

But you are not caught in Catch-22 if you want to learn English. Simply listen to VOA Learning English.